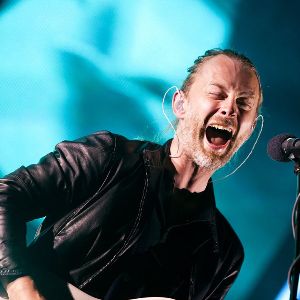 After the first day it’s apparent that it’s BBK Live’s third stage that yields the most exciting fruit. Hidden away from the main arena we began proceedings with Warpaint delivering a brilliant and sexy set in the evening heat. The stage attracted a small, but loyal crowd for a great performance.

The weather threatened to turn for Mumford And Sons, but the folky focus of the Friday line up did a lot to banish the clouds overhead. As expected the band delivered a welcome slice of epic and uplifting folk and were just the ticket for that time of night.

The revelation of the festival came in the form of local favourite Bigott performing to a rammed crowd in the V*******e marquee. The lengthy set of vaguely sleazy feel-good stoner pop was infectiously entertaining and compelling enough to draw your attention away from the continuous loop of 30-second mobile phone adverts being played on stage’s video screens. The Vodaphone logo malevolently glaring down on the crowd like the eye of Sauron was no match for how much fun the crowd were having. In a clever bit of scheduling Four Tet took to the stage before Radiohead‘s set, providing a perfect starter for Thom Yorke‘s main course. The visual lure of watching one man on a massive stage with a laptop might have been lacking, but the vibe built up anticipation and very few of the crowd were left unmoved while Kieran Hebden hunched over his controls like a man possessed.

And so to Radiohead, which everyone had been looking forward to all evening. After some understandable time out after the tragic events at Toronto the group gave us a brilliant performance that was easily one the festival’s highlights. For some The King Of Limbs felt a little underwhelming, but it’s in the live arena that the album really comes into its own letting its multiple textures let rip. Yorke’s vocals typically cut through the crowd like a knife through butter and the light show was dazzling. In a moment of bizarre serendipity, the refrain from Paranoid Android where Yorke repeatedly sang “Rain down on me” coincided with the only downpour of the weekend, but by that time no one seemed to care.