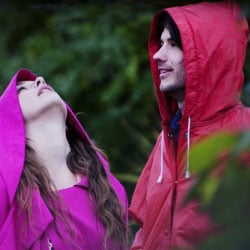 Football stadiums. Record shops. Dairy farms. Prisons. Try and think of somewhere a gig hasn’t taken place at. Some work, some don’t. Some places become associated with certain bands, some become virtual music anathemas. (It is, for example, unlikely that a free festival at a speedway track marshaled by a troupe of Hell’s Angels will be happening again anytime soon). Where historic religious edifices fit into this live venue frame is really down to personal preference. They’re either cold and inappropriately-used monuments that should be left for their intended purpose or they’re haunting, atmospheric spaces that offer ambience and character in a world too accustomed to sticky-floored sweatboxes and dilapidated converted theatres.

Manchester’s grand cathedral is tonight’s perfect or imperfect venue. Sat just at the city centre’s door, the building offers peaceful refuge from the urban chaos that collects around both the Deansgate and Printworks areas. Its tall, handsome tower reaches into a particularly raw, black evening. The ironically-named Beach House are its occupants for the night. Their acclaimed third album, Teen Dream, is the focus of both the performance and this sold out audience, the latter silently absorbing the band’s soothing lullabies like a strangely dumbfounded congregation of believers.

As it happens, the cold cathedral is really the perfect place for the warm-hued timbres of the Baltimore-based duo, who are joined by a number of supporting players. It’s an odd juxtaposition at times; but the glow of tracks like Zebra and Walk In The Park warm the soul and reassure with a basic message that even loss encases both happy memories and provides proof positive that happiness can surely be found again, if it were found before.

Victoria Legrand, the band’s French-born chanteuse, is a wraith-like presence. She stands slightly arched at the hip in front of a beautifully ornamental lattice rood screen and beneath the cathedral’s towering main arch. With no spotlights on the band, it is up to Legrand’s lusty, pitch-perfect vocals to engage the audience in place of anything more visual. Instead, eyes are left to appreciate the subtle, but powerful back-lighting or wander about the curvature and sheer scale of the surrounding architecture. The cathedral’s enormous stained glass window seems to reflect the colours of the music; the coldness of the blues, the passion and bitterness of the reds, the healing warmth of the greens, yellows and oranges.

There’s no doubt that Legrand’s voice is more than capable of filling the hallowed space with its cutting shrieks and occasionally booming tones. But more often, it’s little sequences of her lyrics, said almost under breath, that seem to fit this unique environment so well. “I’ll take care of you, take care of you, that’s true,” sings Legrand, like it were a promise that could never be properly fulfilled. For a short time those in attendance, like many that have stepped along this building’s marble floors, were only too willing to give such hopeful promises the benefit of the doubt.