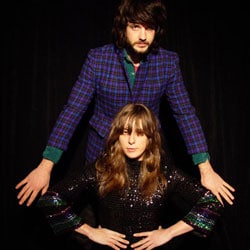 Picture the scene if you will. Seventy or so people crammed into a sweltering gallery little bigger than a living room, all shuffling and stretching to get a glimpse of two (or maybe three) musicians who, for reasons unknown, have decided to perform the gig sat down.

On occasion, a glimpse of hair is seen, or the tip of a guitar, but for the most part the lush sounds appear to emanate from the walls, or up from the ground, swirling over our heads.

These cramped and hardly ideal conditions are all part of ushering in dream-pop duo Beach House’s new album, Teen Dream. Due early next year, the album is a quantum leap from their previous efforts, melding their drip-feed melodies with gorgeous instrumentation and, quite surprisingly, a relatively forceful sense of urgency.

From behind the row of heads singer Victoria Legrand and guitarist Alex Scally settle down in front of what look like two white fur rugs draped over some light bulbs. For most of the night these are the main point of focus for many. Still, the lack of visual stimulus means it’s easier to concentrate on the new songs, of which five are played during the 30-minute set.

Opener Walk In The Park is a perfect place to start, with its atmospheric, repetitive keyboard riff and Legrand’s Nico-esque vocals unfurling into a gorgeous chorus. Legrand then promises a mix of old and new, the former coming in the shape of Gila from their last album, Devotion. It’s noticeably more sombre and funereal, but no less enrapturing, Scally teasing some delicious sounds from his guitar. Well, apparently he was, he could have just been sat doing some knitting for all most of us knew.

Recent free download Norway is another highlight, Legrand’s breathy intro all too appropriate given the stifling conditions. Again, the noticeable change comes with the chorus, the small crowd swaying and singing along. It’s a credit to them that they don’t just sit and play only the new stuff, with oldies such as Master Of None from their debut and Heart Of Chambers from Devotion peppering the set.

Still, it must be exciting to know you have such a phenomenal album up your sleeves; tracks such as Used To Be and Zebra are so swoonsome and perfect that it makes you want to rush the stage and give them both a big hug. The set ends as the new album ends, with Take Care, another lovely slice of atmospheric dreaminess. As Legrand sings “I’ll take care of you / If you ask me to” it’s enough to make you melt, which, to be honest, we were about to anyway. 2010 belongs to Beach House already; they’re that good. But next time it would be nice if they stood up so they could see all the smiles beaming back at them.