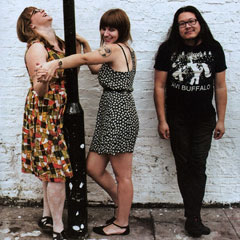 It was about -4 degrees and felt like the coldest place on the planet outside. Inside, California’s Best Coast are playing surf-pop. It doesn’t exactly need Richard Bacon (or anyone else British) to figure out the irony in that. Manchester’s little underground lair, the Ruby Lounge, is also in on the irony. It may be apocalyptically cold out there, but inside it’s burning like the fires of hell. And that’s before the makers of one the year’s best-received records have even taken to the stage.

Once Best Coast are with us it’s good to see that the west coasters aren’t missing home too much. “Man, it’s as hot as balls in here,” offers Beth Cosentino to the clammy, sell-out crowd of 300. Only a few dozen raise anything more than typically British titters. “Did you guys not find that funny?” she responds, with her customary self-confident cheek. We did, but we’re just so in awe of how wonderful she is that we’re, in fact, more nervous than her. Or maybe it’s just because we’re British. And really fucking hot.

It’s so hot in fact that most people quickly give up on elongating their necks or standing permanently on tip-toes in vain attempts to get better views of the band. Although the Ruby Lounge primarily functions as a club, it does have a stage of sorts. It’s just set at exactly the same level as the people watching, so unless you happen to be Nikolai Valuev or enjoy spending nights bizarrely jumping around like Paul Smith of Maxmo Park, the best view to be had is that of Cosentino’s fringe. Things could be worse.

Having just disembarked from, one imagines, a pretty hellish flight from LAX, the band give an energetic performance of an album that is neither downtempo nor balls-to-the-floor frantic. Initially, the band look as though they’d rather just prang out on something louder and less pretty for the first few songs. And Cosentino’s voice does take time to reach its mellifluous peak. But then everything seems to come together; the harmonies stick and slide like honey and the guitar rhythms meld in a haze of reverb and warm fuzz. The ice was broken, the sweat was dripping and Crazy For You just started leaping around the dark and dingy basement like a bunch of baggy-shirted crowd surfers.

The quicker ones from the now-buzzing set – When The Sun Don’t Shine, Each And Everyday, I Want To – fizz with teenage zeal. The slower ones – Our Deal, Summer Mood, Honey – either toy with melancholy or crackle with lustful angst. Every track is so close to pop perfection it’s hard to stop smiling. The crazy thing about Crazy For You is that, due to its innate simplicity, anyone in this audience could look at Best Coast and think, “How hard could it really be?” Three members. Simple skills. Little frill. But there’s a tonne of reasons why albums like this come around so infrequently. For now, it feels best to just sweat out the winter and bask in Crazy For You’s heartwarming yellow and orange glow.