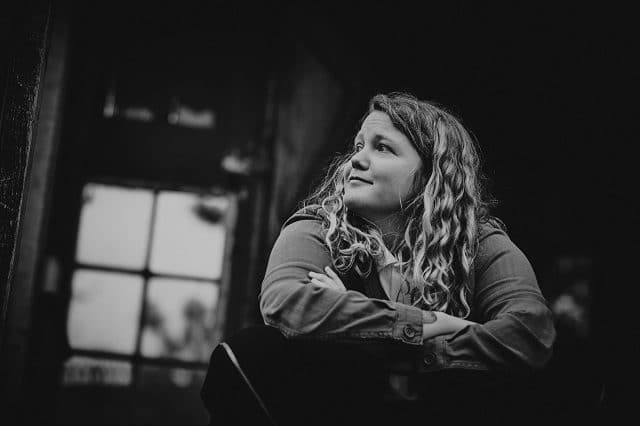 It really is a well-kept secret. A short drive from the North Brabant city of Tilburg in the southern Netherlands, a three day festival has been held every summer for the past seven years. It has, over the years, played host to major international players, from Radiohead to Run The Jewels, and yet really how well known has it become? The secret is worth keeping, so whilst I fully encourage you to read on, please know that none of this information is allowed to be discussed or broadcast in public, under any circumstances. The very name of the festival depends on it. With that said, here are our highlights of Best Kept Secret 2019.

The undercard on Friday is dominated by a trio of the UK’s most tastefully cool survivors of the 1990s boom. Not Britpop also-rans, but independent spirits that existed inside their own ecosystem, producing challenging and compelling, non-conforming records throughout that decade. First are Primal Scream, who seem curiously out of place in the blazing afternoon sun; like shining a spotlight on a small colony of bats, their nocturnal image has been turned on its head.

Nevertheless, they are going strong, Bobby Gillespie still wiry thin and unimpressed. Pleasingly, they play multiple cuts from XTRMNTR, their masterpiece, with Kill All Hippies and Swastika Eyes standing out, their clanking, clattering, crunching affront to decency still abrasive, still dripping in fury and still sadistically compelling. They do expand their sound to more typically crowd-pleasing effect later on, with a stirring version of Loaded that has Best Kept Secret shuffling its feet, before bowing out with Country Girl and Rocks, the trad festival climax that will work a treat for as long as the band survive.

Over on TWO (the five stages are not going to win any prizes for the invention of their names), Stereolab bring a very different energy. The age of psych/kraut proliferation in British and American music came some years after Stereolab’s peak, so it can reasonably be said that they are one of the most quietly influential bands of their generation. Their set here is everything they ever were: intricate, nodding motoric rhythms that swallow you up into their infinite space. They always seem to be just half a step ahead of the listener, both on record and live, and tonight their jazz influence is on full display. It is a lot of detail to ask of a Friday night festival crowd, but they respond in kind, and when the sublime Miss Modular kicks into a higher gear, the ne plus cooltra of Stereolab tracks, they are there for it. 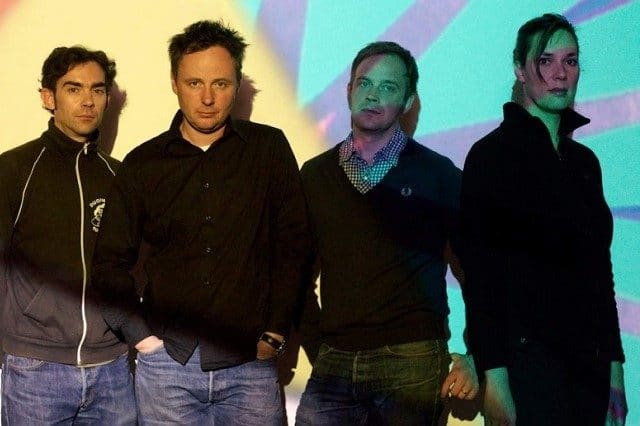 Closing out the ’90s trilogy on ONE are Spiritualized, whose curious semi-circular stage setup, whilst familiar, gives a strange sense of stasis to their visual appeal. Mercy, then, that their music is so imperious. Come Together, that most riotous of tracks, is the opener. It is not the debauched, Stooges barnburner that its 1997 studio version once captured, but it is a bracingly fiery start nonetheless. Where they excel tonight is with the gospel-tinged, soul-summoning tracks that have typified the second half of their career: Shine a Light, its amazing grace reaching the calm elation that we’re always told whale song is supposed to achieve; Soul on Fire elevates and levitates the mind; On the Sunshine is enlightening, its refrain of “Take it easy” easily the best song to ever live by that mantra.

Headlining Friday is Bon Iver. They ignore persistent talkers in the crowd to play an exquisite set dominated by material from the bewitching, beguiling 22, A Million. This band – for a band it is, Justin Vernon having long since evolved past the solo vagrant act that the world became acquainted with over a decade ago – are dextrous, diverse, able to manipulate sound and texture with the confidence of a Bluenote group. 29 #Strafford APTS and 22 (Over S ∞∞N) can melt iron with emotional intensity alone, whilst early track Blood Bank, always a live staple, reminds us that in fact Vernon has had a sizeable hand in the direction of megastar rap icons too in his time, with his ability to wring humanity out of an auto-tuner. By the time we finally arrive at tracks from For Emma, Forever Ago at the show’s very climax, in the form of The Wolves (Act I & II) and an encore screamalong of Skinny Love, there is almost no more love to give. Bon Iver would never have reached any level of notoriety at all, save for a series of fortunate breaks in the late 2000s, but few artists have nailed this last decade as well as Bon Iver, and as the crowd disperses, the air fills with the refrain of the former track: “what might have been lost”.

Saturday and Sunday are dominated by one factor: the heat. Temperatures rest at around 32°C for the duration, and shade is hard to come by. It makes life difficult for the mid-afternoon acts on the outdoor stages, but over at TWO, under the marquis, Yves Tumor is pulling some fine shapes. He has his band confined to the edges of the stage, because he needs all the space he can get. He struts, dances, moshes and fights his way around his platform, a Prince-like fervour to his stage aesthetic. He is a photographer’s field day, an exhibitionist unleashed. His 2018 album Safe In The Hands Of Love was one of the year’s finest, and his set parades the material loud and proud, the experimentation of the music taking a back seat to the ostentation of the performance.

One band that seem at home in the baking heat over at ONE are Phosphorescent. Matthew Houck’s rolling arpeggios and country rock lilting vocals are a natural fit for the desolate, desert heat, and the band’s set are the gentle caress that the moment demands. Song For Zula, complete with skidding Manzarek keys, and the Paul Simon jaunt of New Birth In New England are joyfully received, and My Beautiful Boy offers the earworm for the remainder of the day.

Such sweetness is somewhat harder to come by in the set of Death Grips later in the day. Instead, TWO is bombarded with a blistering, pan-sensory attack; furious, tribal music with no recuse or apology. Those with energy levels still above zero (how?!) use the opportunity to fling their bodies at each other as a frenzied, catalysing energy takes hold of the tent. MC Ride’s taut, staccato delivery is in keeping, a pulverising, air-piercing barrage, whilst drummer Zach Hill has a maniacal style that looks as though he could be slapping the skins with his bare hands. It is the most singular experience of the weekend. 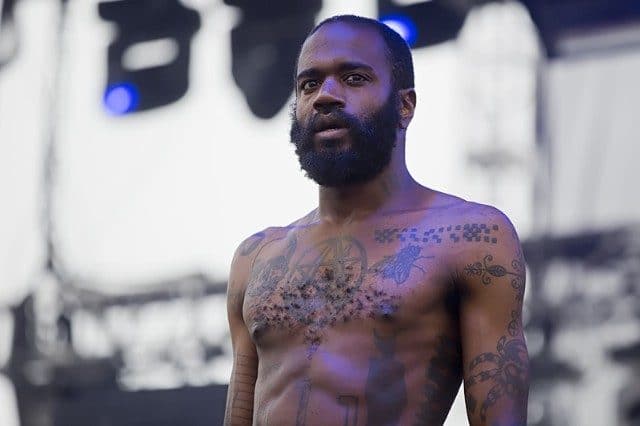 Back on Planet Earth, Mac DeMarco is serenading the ONE stage. His ambling, lazy, sweetly stargazing set is never urgent and most definitely never stressed. Mac’s conversations with the crowd between songs is laugh-out-loud funny, covering subjects from the local delicacy of fries and mayonnaise to the new Godzilla film (“it’s fucking terrible and I’m not saying I didn’t love it”). Tracks like Salad Days and My Old Man are soothing and blissful; it must be the most un-self-serious performance of the festival and it appears to make people genuinely happy.

Saturday concludes with the now-famed 3D show of Kraftwerk. The requisite glasses are passed around beforehand, but they have a counter-productive effect. The same communal spirit that DeMarco was able to access is rendered nearly impossible by this gimmicky affectation, with each individual crowd member now locked into their own experience, eyes locked on a small, unimpressive 3D board behind the band, waiting for a disappointing moment when a car appears to leap off the screen. It is easy to image that fifteen years ago, this would have been a cool novelty, but in an age of IMAX presentation, these effects are, to put it mildly, naff, and prevent a sense of shared experience to boot. The band, lined in their iconic horizontal pose, still possess some of the great melodies, and on occasion a track like Tour De France will drop, a tingle is felt and their true place as the progenitors of electronic music is once again front and centre. Indeed, there is even something endearingly primitive and unchanged about their playing, but it is hard not to see them as a band that has now segued into a museum act.

By Sunday lunchtime, it is hotter than ever. A few heads are pounding, but the best solution to that problem is the set from Julia Holter. She takes the stage resplendent in flowing white and, alone, plays an angelic version of In Gardens’ Muteness from last year’s Aviary, just her voice and a keyboard in celestial union. Her band join her – trumpet, double bass, violin, keys and drums – and proceed to play a set of beautifully designed disorder. The Aviary album is her most avant-garde to date, a reaction to the maelstrom that the world has been plunged into, and in this set it is bristling with experimental possibilities. Just watching her drummer is entertainment enough – he clips, taps, strokes, rubs and scratches the various parts of his kit, sometimes all at the same time. There is rarely a clear beat or rhythm, it is a melange of jazz-folk that titillates the imagination and soothes the senses. She dips into Have Your In My Wilderness three times, all to great ovation, but this is a showcase of Holter’s current state, and it is not one of compromise. Never anything less than magical, Holter is the acceptable face of experimental music in 2019 and should be celebrated. 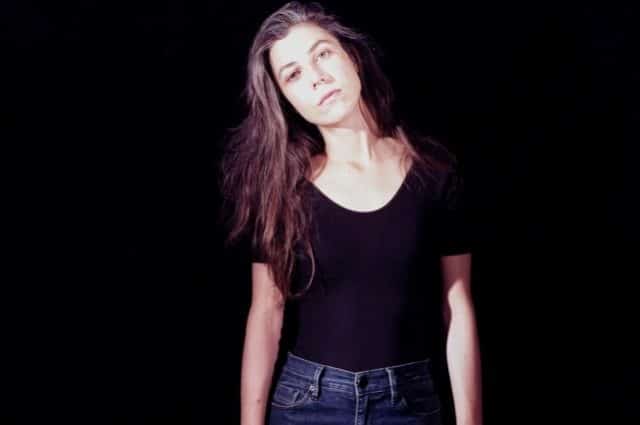 Over on FIVE, the tent is a sellout for the arrival of Kate Tempest. Entirely alone, she bursts into her opener, the political state-of-the-nation rally that is Europe is Lost from 2016’s Let Them Eat Chaos. It is greeted like a returning hero, the three years since its inception only exacerbating the crises that the song itself sets out. Tempest follows it by explaining that the bulk of the rest of the set will be new material, taken from her forthcoming album The Book Of Traps And Lessons. The adulation is not dimmed, there appears to be genuine excitement to be privy to an advance performance of the material and they are justified. The scope of Tempest’s wrath is no narrower, but her way of articulating it is maturing. Where there was anger, now there is resolution to find a way through, to trust in compassion and humanity, a lesson we could all take heed of. By the time she finishes with People’s Faces, the central conceit leaves few eyes dry: “There is so much peace to be found in people’s faces.”

Rounding out Friday on ONE are Carly Rae Jepsen and Christine And The Queens, two very different examples of contemporary pop music. Jepsen bounces around the stage in a kind of joyful naiveté, her fizzing compositions innocently putting a skip in the step of some tiring legs. Call Me Maybe, dropped curiously early in the set, has a lot of thirty-something music connoisseurs pretending to ironically bop along, inwardly rejoicing in the opportunity to let their poptimist flag fly. A sudden and perhaps inevitable electrical storm strikes as Jepsen departs, and the rain sets in, in an unfortunate development for Héloïse Letissier and her altogether more grown-up version of the pop dream. She battles on and the crowd wilfully persevere, with wiry electro-funk tracks like 5 Dollars and Girlfriend offering a seductive, progressive and uplifting end to a weekend of high calibre, genre-blind music. Just remember, don’t tell anyone about it.