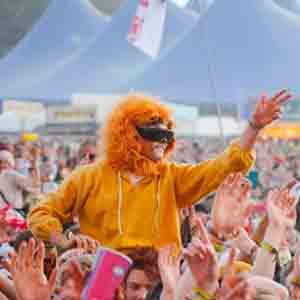 It’s fancy dress competition day so the entire Bestival site is awash with tigers, dinosaurs, giraffes with full-length necks, Smurfs, shrimps, stingrays and ostriches – making it impossible to be glum.

A full-on hoedown is taking place on Bestival’s main stage courtesy of Skinny Lister and Wiley is pumping out some rough electronics from the Big Top, but today is a scorching summer’s day so what better way to start it than with Prince Fatty‘s reggae over in the beautifully bedecked Bollywood tent? With a charismatic MC and soulful vocalist down at crowd level, Fatty transforms tracks like Gold Digger and The Whispers‘ And The Beat Goes On, into warm reggae classics.

Sister Sledge take over the main stage to play some of their timeless disco classics such as He’s The Greatest Dancer, Lost In Music and Frankie. Meanwhile in the Big Top, huge respect as ever is being paid to Beardyman, who creates a whole set on the spot using mostly his voice. Highlights include his own take of the Prodigy‘s Poison and dozens of original, off-the-cuff tunes, many of which could be hits in their own right. He does use a keyboard here and there but this is just part of his mission to take beatboxing to the next level. Running from hip hop and drum and bass to dubstep and rave, Beardyman then ends the madness with his own, slow burning remix of Depeche Mode‘s Enjoy the Silence which offers a tender final touch.

Slugabed takes to the Rizlab stage to treat the crowd to some post-dubstep beats, with some of his own unmistakable melodies dropped in for good measure. He then gives way to Falty DL who takes things in a deeper, housier direction before going off on a more experimental, yet still melodic and danceable tangent, as you’d expect any self respecting Ninja Tune signee. The sun continues to beat down as De La Soul arrive fashionably late on the main stage but they’re quickly forgiven as they get the crowd involved and deliver a charismatic performance that takes in old favourites Eye Know, Saturdays and Me, Myself And I. During their heyday they offered an antidote to the darkly threatening gangster rap of the day and today their hip hop still has something more to say than contemporary hip hop#s vacuous tales of money making, party starting and lady loving or ego-flexing self congratulation.

As night falls, Slipmatt can be heard entertaining the ravers at the Arcadia stage with the likes of Bizarre Inc, Congress and Rozalla but there’s retro action of a different kind to be had over at the main stage in the form of New Order. As they start with Crystal, it immediately becomes apparent that the distinctive bass sound of Peter Hook remains intact, despite the man himself having taken his bass and ego elsewhere. It seems to have had little effect on long-term members Bernard Sumner, Gillian Gilbert and Stephen Morris as current bassist, Tom Chapman, amply fills Hook’s shoes on the string of hits the band run through including Regret, Age Of Consent, Here To Stay and the goosebump-giving Bizarre Love Triangle. The crowd-pleasing set continues with their two biggest tracks, True Faith and the hugely influential Blue Monday, which sees Sumner join Gilbert on keyboards. As Sumner has a quick coughing fit he jokes: “I must give up smoking, maybe it’s the burger van over there? If it was Morrissey up here I’d soon be off the stage.” He then launches into Temptation – the final, impeccably performed New Order song of the night, as the encore is made up of Joy Division‘s Transmission and Love Will Tear Us Apart, which ends the best performance of the weekend so far.

Immediately after, the crowd turns its attention to French dance duo Justice, but the Big Top marquee is so rammed that those at the back, standing outside the tent and halfway across the field, can only hear a thudding kick drum at best. A shuffle around the marquee means a decent enough listening point can be gained to hear an extended version of D.A.N.C.E drop from a manic acid throb to gentle organ keys and ratcheted back up again.

The mob shows no sign of subsiding though and calmer sounds are sought by many who retreat up the hill to the lake at the heart of the Ambient Forest where Chris Coco is soothing weary souls with a typically chilled selection. Those in need of a wake-up smack-around-the-chops on the other hand, head off to the apocalyptic setting dreamt up by Arcadia. The art collective’s mechanical fire-breathing dragon and four-storey tornados of fire are impressive enough, but then the crowd are treated to a death-defying act that sees a man climb to the top of a thin, 56-metre ‘sway pole’ with no harness, then swing back and forth lying down or standing on one leg. It’s truly amazing.

Once the show is over it’s then over to the Stanton Warriors as fire spurts out of the burning streetlamps surrounding the stage in synch with each kick drum. Starting the set with a selection of their own material, the duo then provide a typically strong set of breaks and bass, including Claude Von Stroke‘s Who’s Afraid Of Detroit?, We Are Your Friends and the Kleptones‘ Voodoo Sabotage mash-up. It forms an explosive end to another brilliant Bestival day, and there’s still more to come.