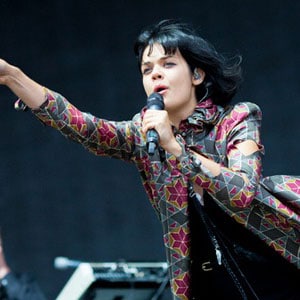 As people emerge from their blast furnace-like tents, it’s looking like another scorching day is in order – something that many 2012 festival-goers would have given their sodden right-foot for. So even when the cloud does roll in, the colourful Bestival crowd continue to wag their fancy dress tails.

Roots Manuva‘s distinctive blend of hip hop, funk and indefinable musical eccentricity has the crowd’s arms aloft as he runs through tracks like Jah Warrior black suited and bow-tied and looking very much the gent. Bat For Lashes follows, showcasing material from her upcoming third album including the heartachingly beautiful Laura, a piano ballad that was somewhat overlooked when it was released this summer. Other new material includes the understated synthpop of A Wall, which again hints that The Haunted Man album could have the potential to be Natasha Khan’s most successful yet. The new tracks nestle comfortably next to the older material she airs like the chanted Pearl’s Dream, which sees Khan skipping playfully around the stage, maraca in hand, and set-closer, the ’80s-styled Daniel.

Sigur Rs immediately introduce their loud/quiet aesthetic when they begin their set with a twinkling music box melody and follow it with a crash of drums and crunch of guitars. This is then overlaid with brass, strings and Jnsi Birgisson’s drifting falsetto and the Icelandic band’s stall is set. Birgisson then takes a violin bow to his guitar to create a wall of aggressive feedback, which is then replaced by gentle guitar, horns and soaring vocals before crashing to life once again then fading away. The twinkling piano of Sglpur then receives a warm welcome as it soars its way from melancholy to ecstasy and back again.

The bass emanating from the Big Top may be annoying during the set’s quieter passages but the swells of emotion that each dark light shift brings still proves transformative. Sigur Rs are very much a band about nuance rather than the obvious and their music is stirring, beautiful and deceptively simple. The biggest reaction from the crowd is reserved for their best-known track, Hopppolla, which may have been used, ripped off and heard a thousand times but still holds a deep emotional charge.

Global superstar Stevie Wonder shifts the onus from gentle understatement to full on crowd-pleasing from the moment he walks on stage wearing a keytar and breaks into How Sweet It Is (To Be Loved By You). Following an inspirational speech about Obama and how the current president needs to win the next US election to defeat racial hatred, Wonder plays classic after classic including Master Blaster, Higher Ground and Don’t You Worry ’bout A Thing. He then gets the crowd to sing along to My Cherie Amour but stops momentarily to ensure they’re singing the correct words. Having not only proved that at 62 years old his voice is still intact by delivering so many examples of his vast back catalogue with such precision and perfection, Wonder also displays his talents as a multi-instrumentalist, playing the piano and funk-heavy keys then, as on For Once In My Life, delivering a brilliant harmonica solo. Some of the set’s breakneck momentum is lost when Wonder launches into an extended jam but he soon wins the crowd back by playing another favourite, Superstition. The set isn’t without its schmaltz as Wonder plays I Just Called To Say I Love You, but the crowd still sings along with all its might.

Having introduced his daughter and backing singer Aisha, Wonder then briefly sings “London” to the tune of Empire State Of Mind, though being on the Isle Of Wight, perhaps singing “Newport” would have been more apt. He then sings Isn’t She Lovely to his daughter as she sits next to him. Following covers of the Beatles‘ She Loves You and Marvin Gaye‘s What’s Going On, Wonder ends a triumphant, crowd-pleasing set with his sing-along hit, Happy Birthday.

Following the impressive main stage-closing firework display, Pathaan entertains those taking a breather at the Ambient Forest with a laidback selection that still has people dancing on the tables. But there’s still some action to be had in the Big Top tent in the form of one of the UK’s longest serving electronic acts. Orbital‘s Phil and Paul Hartnoll begin their set with the still beautiful Halcyon, which the brothers have now remixed but still features the live treat of Belinda Carlisle and Bon Jovi samples. In fact, the duo has now mixed many classic Orbital tracks for their live set, having perhaps made their gigs overly reliant on the same ‘greatest hits’ format for slightly too long in the past. Tonight’s set sees Satan slowed down to a dubstep skank as images of Romney and various other Republicans flash up on the giant LED screens. Impact has also been reworked to sound even bigger and scarier and Are We Here? receives a brilliantly dark re-rub and even features a Carpenters sample. New material from most recent album, Wonky, such as the title track with its spat out vocals, the joyful Never, euphoric head-nodder Straight Sun and growling Stringy Acid, another example of Orbital’s return to form, nestle perfectly alongside the older material such as set closing roof-raiser, Chime. Where Is It Going? provides a few more goosebumps for the encore and that’s it: Orbital’s set providing a fittingly celebratory end to a festival that had such an abundance of highlights.

Aside from the three-hour queues to leave the site, Bestival 2012 delivered consistently on so many levels. Having thrown such a fantastic four-day party, it’s hard to see how Rob Da Bank and his cohorts can surpass this year’s festival with next year’s 10th anniversary celebrations, but it’s guaranteed they’ll have countless creative ideas up their sleeves to try and make Bestival 2013 even better.