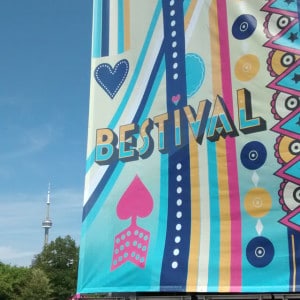 Bestival, the brainchild of DJ/producer Rob Da Bank and his wife Josie, is a fixture in the British festival calendar, growing from 10,000 attendees in its 2004 debut to around 55,000 just six years later. Nestled amid the Isle of Wight’s rolling greenery, it has carved a niche for itself as a “boutique festival”, where vegetarian food is big, fancy dress is bigger and charitable causes are never far from the fore.

Toronto is now the location for Bestival’s first international iteration, even though the city and its surrounds already play host to an abundance of summer music weekenders including Field Trip, OVO, T.U.R.F., North by Northeast and, in 2015 specifically, the much-hyped WayHome, featuring the likes of Neil Young, Sam Smith and Modest Mouse. There’s also Panamania, a vast, one-off, 35-day arts and culture happening tied to the Pan Am Games.

Most would see that as a crowded marketplace, but Rob, ever the optimist, decided it was a festival gold rush; a sign that Canada – and Toronto in particular – was the ideal match for a two-day music-and-art extravaganza under the Bestival banner. The site itself is certainly suitable: Hanlan’s Point, on the beach-lined, downtown-facing Toronto Islands, is a world unto itself, handily located yet far removed from the relative chaos of T.O.’s urban jungle. It’s a green idyll with Isle of Wight qualities, though the parallels were perhaps a little too pronounced on a Friday that brought with it relentless downpours of the English variety.

Bestival shifted 15,000 tickets for each day, but such deluges – combined, perhaps, with weekday work commitments – ensured a slow start to the weekend. Jamie xx and Omar Souleyman came up against one another (and the elements) on the Bollywood Stage and Main Stage respectively, while heavy hitters SBTRKT and Flume kept their feet dry in heaving Big Top. The arena gradually became a swamp as WAVVES and Clean Bandit played to sodden spectators, and the steady trickle of festivalgoers turned into a torrent in time for Florence And The Machine’s headlining set. The weather did the opposite, drying up almost completely as she belted out numbers from number one album How Big, How Blue, How Beautiful as well as crowd favourites Shake It Off and Rabbit Heart (Raise It Up). The astonishingly successful Londoner gave props to Bestival for helping to break her career, yet for all her timeless appeal there was a reminder that this Canadian version was making its debut: the set ended, the lights went up and there was hell on as punters queued for hours to be ferried back to the mainland. A logistical headache that one hopes will be ironed out next year.

Saturday proved to be the showstopper, helped in part by the fates obliging with a full day of blue skies (how big, how blue…) and blazing sunshine. The swimming pool-sized puddles at the Main Stage were becoming crusty mud patches even as Montreal indie darlings TOPS played their sunshine pop to a handful of early birds, climaxing with 2014 sleeper hit Way To Be Loved. Nathan Barato blew away the cobwebs with 90 minutes of bruising breakbeat in the shadow of the Bollywood Stage, a vast, ornate construction whose pink elephants and green monkeys would later be joined by scantily clad dancers and spectacular pyrotechnics. In the Big Top, meanwhile, Harrison’s vibes were altogether trancier, pulling in ambient forest sounds that suited the tent’s role as early afternoon shelter from the sun, before Toronto-based DJ/producer Kill Them With Colour dialed it up with sample-led funk and 90s-flavoured R&B beats.

Scottish funsters The Cuban Brothers – who were actually billed as hosts along with Rob – served up funk and cheap laughs in equal measure for a small yet rapt Main Stage congregation. Dressed in matching red suits, the irreverent trio ran through a medley of De La Soul’s A Roller Skating Jam Named Saturday and Isley Brothers’ I Got Work To Do before introducing fourth brother, Juan Erection, for a spot of breakdancing to Get Up Offa That Thing and finishing with So Sweet from their 2013 debut Yo Bonita and a mash up of Breathe And Stop/Don’t Stop Til You Get Enough. They’re unlikely contenders for an Ivor Novello, but they’re worth their weight in gold for a mid-afternoon Main Stage slot.

Over at the Perrier Greenhouse, with its fake grass interior and swish mirrored bar, Johnny Nobody dropped dance jams in succession, but the greenhouse effect was a little too literal as the temperature soared inside. Local lads Born Ruffians had similar problems at the Main Stage, frontman Luke Lalonde decrying the heat as his band ran through a high-energy set consisting of radio favourite Cecilia, Hummingbird, Retard Canard (more than a little Little Comets-like), Cold Pop, I Need A Life and undeniable earworm Needle In The Hay.

But the real magic awaited at the Sunday Best Balearic Beach Club, where a wooden walkway led revellers from lush lawns to the soft sands of Hanlan’s Point Beach. Isaac Ferry was followed by Rob Da Bank himself in the late afternoon, by which time the DJ’s dainty tiki setup had attracted hundreds of bare-chested dancers throwing Ibiza-themed shapes. Rob foreshadowed Caribou’s evening appearance by dropping Can’t Do Without You, then echoed The Cuban Brothers’ efforts with A Roller Skating Jam Named Saturday. The brothers themselves had made their way to the rickety booth, Kengo-San stripping down to speedos to lead the party – but Hanlan’s Point Beach also happens to be clothing optional, and he was positively overdressed compared to the threadless beachgoers who were politely asked to keep their distance from the Beach Club’s boundaries.

The Bollywood Stage was by this point bellowing flames as first DJ Tennis and then Paco Osuna capitalized on the audience drawn by Daphni (better known as Dan Snaith, or Caribou) with foot-to-the-floor dance and pounding hardcore beats. Further throngs were attracted to the shady Big Top for Matoma, the highly fancied Cashmere Cat and then Keys N Krates, the cumulative effect of which was to maroon the Main Stage somewhat. So it was only a modest crowd that witnessed the opening salvo of Owen Pallett’s math-baroque set (a virtuoso performance of I Am Not Afraid) before the likes of Soldier’s Rock, Song For Five & Six, Infernal Fantasy and the Yann Tiersen-esque Scandal At The Parkade brought curious ears ever closer. The Great Elsewhere’s epic sprawl drew affairs to a close before Banks took over Main Stage duties, her hit-laden set including Alibi, This Is What It Feels Like, Goddess, Change, the Lorde-like Before I Ever Met You and Drowning.

Caribou’s Main Stage appearance marked the beginning of the festival’s end, his hour-long set utterly attuned to the island’s sunset-tinged surroundings. It began with the irresistible Our Love and took in highlights from 2010’s Swim, including Bowls and the phenomenal Odessa. Can’t Do Without You wrapped things up, becoming one of the weekend’s “I was there” moments – though Main Stage headliner Nas can perhaps lay claim to a few more moments more as he ran through hit after hit and brought the seminal Illmatic back to life. Life’s A Bitch, The World Is Yours, N.Y. State Of Mind and Represent were aired in all their old school glory, and Nas’s vibrant demeanour – especially between tracks – was at odds with peers still performing past their prime. A fitting conclusion for a festival set apart by its uniquely positive vibes.