by Philip Matusavage
published: 4 May 2013 in Live Music Reviews
Tweet 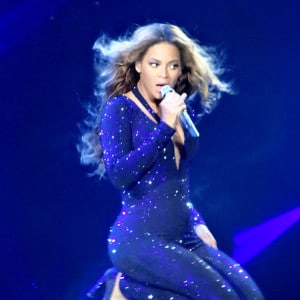 To say that the crowd in the O2 Arena is excited about seeing Beyoncé would be an understatement. As the minutes count down until her arrival, various adverts in  which she features play on the big screens and each one is greeted with the kind of deafening roar which lesser pop stars would gladly spend an entire career chasing. People visibly shake with excitement, and shrieks of “Beyoncé!” resonate around the arena.

Somewhere along the line, Beyoncé transformed from ‘the main one from Destiny’s Child who went solo’ to a bona fide icon. You can chalk up the various moments that have lead us here: the era-defining Crazy In Love; her show-stealing X Factor duet with Alexandra Burke; the feisty and populist feminism of anthems like Irreplaceable; that Single Ladies (Put A Ring On It) dance; a Glastonbury performance which had people talking for weeks and, of course, the spectacular Super Bowl halftime show earlier this year. Each one has taken Beyoncé further into the realm of a hyper-celebrity which only artists like The Beatles, Madonna and Michael Jackson at their peak can compare to. It’s no wonder, then, that the presence of this world-conquering behemoth in an 18,000 capacity arena in Greenwich seems impossibly exciting for so many: it feels less like a gig and more like a Visitation.

Her presence is heralded by a video depicting her as a Queen, her female courtiers preceding her on-stage. And then suddenly Beyoncé is standing front and centre and launches into Run The World (Girls) – the screams are eardrum-shattering. What has always been a rather stilted production number on record becomes thrilling and visceral before exploding fireworks announce the brilliant End Of Time. Everyone has already seen Beyoncé’s almost-supernatural abilities in full-flow but to witness them in person is astonishing.

Such fiery energy would be unsustainable but it’s still a surprise when the third song is the insipid Flaws & All, a B’Day deluxe track which no-one needs to hear again. Nonetheless its ‘I’m just like you, really!’ sophistry is met with wild appreciation – at one point Beyoncé shakes her toned arm as if she has bingo wings and it almost seems like some people are going to pass out with happiness. It highlights one of the central contradictions of Beyoncé as an artist – she is insanely talented and has enough charisma to fuel a nuclear bomb yet she clearly also has an ego to match and the tension between this and her everywoman shtick is fascinating to watch. At one point towards the end of the concert we are treated to a montage of Beyoncé’s life to the strains of I Was Here – images of Beyoncé with the President, Beyoncé doing charity work, Beyoncé with superstar husband Jay-Z, Beyoncé on holiday, Beyoncé at the Super Bowl. It says absolutely nothing other than ‘look at how great I am’ and it’s almost impossible to think of another pop superstar who would be indulged in this, yet once again it finds a hysterically grateful audience here.

A large part of that indulgence is undoubtedly a response to Beyoncé’s innate brilliance and this show firmly places her at its centre. The production values are relatively low-key compared to most other arena pop concerts, with the performances revolving almost entirely around a dazzling video screen which Beyoncé and her dancers perform in front of and sometimes interact with. This works to coruscating effect on the awe-inspiring light show which accompanies the ’80s-Prince funk of Schoolin’ Life or the shadow dancing which illustrates I Miss You. New song Grown Woman (another empowerment anthem) is an irresistible cornucopia of African imagery, but an ill-advised mash-up of If I Were A Boy and The Verve’s Bittersweet Symphony finds Beyoncé alone on stage just when distraction is needed most. There are no such worries in a middle-section taking part on a second stage in the centre of the audience: Irreplaceable, Love On Top and Survivor are delivered straightforwardly and Beyoncé seems to be having great fun. It’s a show highlight.

It is, however, a trick which she repeats from previous tours – Irreplaceable is even preceded by some crowd interaction which exactly replicates what she did on 2007’s The Beyoncé Experience tour. This is perhaps the most notable problem with this show: it employs a lot of repetition. You of course wouldn’t expect to see Single Ladies (Put A Ring On It) without its iconic routine but many of the other performances vary little from how she has performed them many times before. The low-point of this comes when a brief cover of I Will Always Love You flows into Halo, re-tooled as a tribute to Whitney Houston. Given that it’s already been used to honour both Michael Jackson and the victims of the Haiti earthquake, it can’t help but feel rather schmaltzy and hollow.

Still, if it’s to be hoped that Beyoncé shakes things up and stretches herself it’s only because it’s difficult to imagine what her limits could be. She truly is a force of nature and everyone in the O2 Arena bends to her will, with the magic being in the fact that everyone absolutely loves to submit to her. She may not be the most interesting pop star around at the moment and her material may be a mixed bag but there is no-one who can compare when it comes to performance. For that alone, the shrieking is deserved.