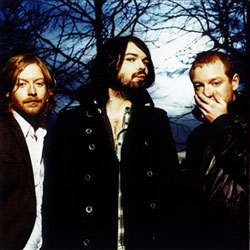 It’s the closing night of the month-long iTunes festival, comprising of 60 acts. As opening sets go, tonight’s Biffy Clyro support is a biggie for Leeds newbies Pulled Apart By Horses.

As the lights come up and drums kick in, guitarist James Brown shoots backwards across the stage as if hit by a bolt of lightning, while lead singer/guitarist Tom Hudson unleashes the full force of his hardcore vocals for the opener E=MC Hammer. It gets the crowd jumping almost as high as six-feet-plus Brown, who launches himself off a stack of amps to an immediate roar from the front three rows. Next up was High Five, Swan Dive, Nose Dive which saw fearless frontman Hudson dive over the side of the stage, sparking a sudden surge towards the front and a wave of wannabe crowd surfers. It soon became clear that Pulled Apart By Horses, whose drummer Lee Vincent recently got the face of Transgressive Records’ A&R man tattooed on the inside of his left leg, would stop at nothing to secure their following.

Clear favourites from the set included Get Off My Ghost Train, Meat Balloon and Yeah Buddy, the latter of which they divulged as being about a guy who took too many steroids. Pulled Apart By Horses handed a scorching crowd over to the Scottish headliners, who entered the stage to the ending of Alison Krauss‘ American bluegrass country classic Down In The River To Pray.

Once in position, the bare-chested, tattooed trio wasted no time in raising the tempo by opening with the anthemic That Golden Rule. Taken from their latest album Only Revolutions, which has been nominated for this year’s Mercury Prize, it proved a popular choice with the revellers who bounced frantically to the violent bass and interwoven guitar riffs.

It’s not unknown for Biffy’s frontman Simon Neil to spend the majority of his night with his back to the audience, and tonight’s performance confirms this. By the second track he’s dropped to his knees at the corner of the stage and cradled his Strat as if bleeding the notes from his small intestine for a challenging Living Is A Problem Because Everything Dies. “You can always tell how well you’re doing as a band by how good looking the audience are, and I have to say we’re doing pretty well,” joked bass player James Johnston, to which the crowd once again roared.

Having suitably exercised their musical prowess they drew their set to a close with a series of sing-along riff-tastic crowd pleasers including Bubbles, Born On A Horse and the chart-topping Mountains, complete with harmonies. Despite being in possession of a back catalogue of heavy duty progressive rock numbers, Neil took pride in stripping their work back to basics for an acoustic and melancholy Machines from the fourth award-winning album Puzzle.

Amid chants of ‘Mon the Biffy’, the Ayrshire-born trio closed the show with The Captain, leaving the audience and event organisers in no doubt as to why they were the obvious choice to finish off the 2010 festival.