by Daniel Paton
published: 24 May 2019 in Live Music Reviews
Tweet 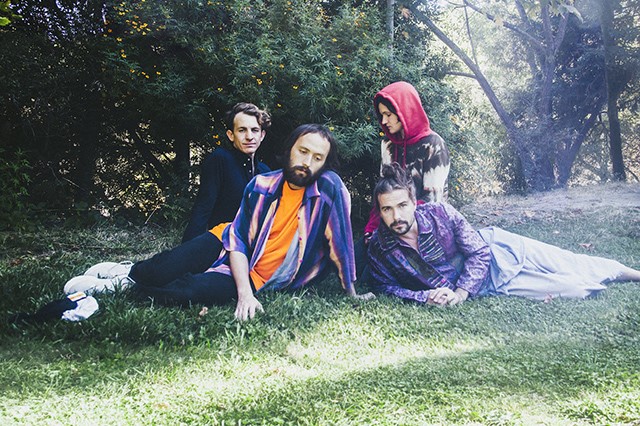 There is a moment towards the end of this valedictory show that clearly illustrates Big Thief’s steady and quiet rise. The audience are cheering and applauding for a sustained period of time, preventing singer and guitarist Adrianne Lenker from instigating the show’s home straight. It is a genuinely delightful moment, the band being received with the kind of ardent hearted devotion usually only reserved for artists of wide commercial appeal or of longstanding legendary status. Ostensibly in the UK to promote the intricate and mesmerising new album U.F.O.F. the band end up delivering a career spanning set of impressive authority and intensity. With all four band members now residing in different parts of the world, their demanding touring schedule appears to have cemented them together as an enviably symbiotic musical unit.

Big Thief also have the risk taking confidence to open the set with two as yet officially unreleased songs. Spud Infinity, a solo vehicle for Lenker, is a melodically simple but eccentric and quirky country tinged song with curious lyrics that sometimes seem to veer into nonsense rhyme (including an exhortation about ‘accepting the alien you’ve rejected in your own heart’). By way of immediate contrast, ‘Not’ is bigger, louder and more excoriating. It also provides invigorating evidence of Lenker’s searing qualities as an improviser on guitar, and it would be satisfying to hear future Big Thief material explore this side of her musicianship a little more. Her guitar playing appears to be every bit as malleable and emotionally charged as her singing.

Lenker’s vocal presence is both slippery and compelling, as she is able to adapt the character, tone, dynamics and sound of her singing to suit the particular qualities of each individual song. U.F.O.F. has seen the band move labels from Saddle Creek to 4AD and the new material often has a mysterious and ethereal sound that appears to draw as much from The Cocteau Twins as from more conventional indie rock or country. Lenker’s vocal is thinner and more whispery on the concentric circles of Contact and raw and vulnerable on the tremendous Terminal Paradise. Cattails manages to combine a fascinating and breezy playfulness with longing. It’s something of a shame that some of the new album’s most unusual and interesting tracks (the twisty dust roads of Century, the vivid atmospheres of Strange or the hypnotic Jenni for example) are omitted tonight but it is possible that these may appear in the set lists further down the road.

As an ensemble, Big Thief clearly consider the wider possibilities of sound and execute their parts with genuine care as well as passion. Guitarist Buck Meeks provides texture and shimmer (and also gets his own warmly received solo spot on Pareidolia), whilst the engine room of drummer James Krivchenia and bassist Max Olertchik concoct a subtly driving and detailed groove. The band as a whole has great feel and an adroit sense of space and dynamics. Krivchenia has a distinctive drum sound, with a flat, low sounding snare combined with the intriguing dryness of a ride cymbal that appears to have been reshaped and partially sawn off.

The earlier material is greeted with rapture, not least for Adrianne Lenker’s elaborate and compelling approach to melody. Shark Smile retains an amiable chug and continues to be a favourite, despite veering into much more conventional territory. Paul is lustrous and soulful whilst the more unpredictable, agile and gracefully turbulent Real Love (from 2014 debut Masterpiece) is tremendously cathartic. One consistent thread throughout Big Thief’s output so far is the ability to draw surprising and emotive results from combining the traditional ingredients of rock music. It is genuinely impressive to draw this kind of audience without the aid of magazine covers or particularly prominent reviews in the UK, and Big Thief are a band continuing to evolve in imaginative and assured ways.