by Daniel Paton
published: 9 May 2011 in Live Music Reviews
Tweet 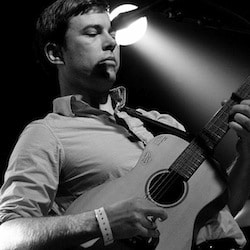 Bill Callahan is always there – and, as a result, it’s so easy to take him for granted. He dependably releases new material at least every couple of years and it’s never less than interesting. There has not, however, been one classic album on which music critics all agree and which might enter the canon. There are longstanding followers who might opt for one of the earlier Smog albums, especially Wild Love. Perhaps the big breakthrough was Knock Knock, but others admire Supper or A River Ain’t Too Much To Love. Since abandoning the Smog moniker, he’s recorded three excellent albums under his own name. This performance, whilst on the surface a minimal and self-contained affair, may actually have been a strong argument for Callahan’s radicalism and importance as a songwriter.

Oddly, perhaps the most noticeable thing on stage is the drum kit. The bass drum is small but incredibly deep, and the whole kit faces across the stage from the front at stage right. This is unusual for what is ostensibly a rock band set-up but the nature of the music soon reveals why. Callahan, clad in his customary white suit, is joined onstage by guitarist Matt Kinsey and drummer Neal Morgan (the latter also a member of Joanna Newsom‘s extraordinary backing band. Kinsey creates twangy, reverberated textures at times reminiscent of Bill Frisell, at others of Dylan Carlson from Earth. He adds a menacing, malevolent atmosphere to many of the songs from Callahan’s most recent album Apocalypse. Morgan adopts a similarly creative and highly complementary approach, playing with a variety of sticks, brushes and hands.

Whilst this music is always directed and inspired by the song (always providing space for Callahan’s typically laconic vocal phrasing), it is also freewheeling and flexible. Morgan is adept enough to cover for Callahan’s occasional skipped beats, whilst the group as a whole seem empathetic and responsive to each other. In many respects, they operate more like a jazz trio than a folk or rock band. Callahan plays a nylon stringed acoustic guitar throughout, which provides a delicate bed over which Morgan and Kinsey can create drama and movement. There is no bass player to anchor the proceedings and, perhaps for this very reason, it all sounds gloriously floaty and unlimited.

The songs from Apocalypse make a good deal more sense when seen and heard in this highly creative environment. The opening Riding For The Feeling is appropriately evocative and cinematic. The outstanding Drover, on which Neal Morgan deftly provides the sense of motion through the wilderness, is epic and spacious. The satirical America! is propelled by a jaunty bounce from Morgan and from Callahan’s guitar ostinato (a technique he returns too frequently). Even the more obtuse, introspective material such as Universal Applicant becomes strange and compelling.

Callahan assuages his long term admirers with some choice cuts from the latter stages of the Smog era, most of which are drawn from A River Ain’t Too Much To Love. Let Me See The Colts is a gently rolling, intricate narrative treat, whilst Say Valley Maker is very much of a piece with the material from Apocalypse. Perhaps most warmly welcomed by the very appreciative audience is Our Anniversary, the caustic ballad from Supper. It’s fantastic to hear these songs imbued with the innovative approach of this small ensemble.

In the very generous set, Callahan also finds time to deliver the highlights from Sometimes I Wish We Were an Eagle. Even without the lush string arrangements, Jim Cain still sounds rich and detailed. Eid Ma Clack Shaw remains deeply odd and beguiling and My Friend is delivered with a hint of righteousness. If Callahan’s emotionally detached delivery can become less startling with familiarity – this highly imaginative group has added new energy, subtlety and dynamic contrasts to his idiosyncratic songwriting.