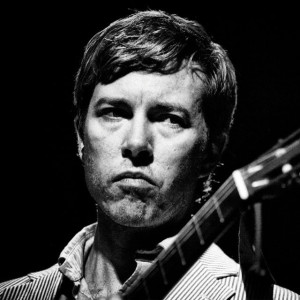 Bill Callahan, the southern-born troubadour with claims on many a bedroom headphone listening session, can make the cavernous 2,500-capacity Royal Festival Hall feel small. Orchestras regularly struggle with this feat, while Callahan barely cracked a smile. But over two hours and 14 songs, the 47-year-old musician and his band turned out one disarmingly slick, powerful and confounding show.

After more than two decades of writing and performing music, it’s not surprising that Callahan has a learned a trick or two. He’s always been a master of economy on his albums – especially the early Smog efforts – and his ability to judge the right amount of band and atmosphere onstage was the triumph of his two-night stand on the Thames.

Four dudes, one harmonica, two electric guitars, one glitter-painted bass, barely half a drum kit and six lights is all it took to conquer the behemoth of a room, transforming it into a gig with the cosiness of a chamber music recital. Callahan stood, his sidekicks sat. Dryly, soberly and without fuss, began The Sing with the rather apt lines: “Drinking while sleeping/ Strangers unknowingly keep me company.”

And what company he kept, spinning yarns through his music all night while peppering the silent punctuations between songs with only the most modest of utterances. It took two songs, The Sing and Javelin Unlanding, both from recent album Dream River, to produce the deadpan comment: “It’s wonderful to be here tonight. Thank you for coming. Can I get some more drums?” And only after the next three songs of Jim Cain, Spring and Drover had been unveiled, did Callahan blurt: “More congas please!” as he launched into the opening riffs of the only Smog tune and clear fans’ favourite of the night, Dress Sexy At My Funeral, from 2000’s Dongs Of Sevotion.

He continued to leave his songs to do the talking. Dressed in a crisp check shirt rolled up over his elbows, guitar strung high up his torso and wearing trousers that boasted vague pleats, he looked like a boy ready for church as much as he looked like musical peddler of tunes dealing ever-so-off-handedly with themes of apocalypse and social alienation. Flanked by guitarist Matt Kinsey on one side, and bassist Jamie Zuverza and drummer Adam Jones on the other, he often shut his eyes and let his rich, deep baritone get to work. He sounded great – the recording of Dream River is probably the closest he’s come to capturing its full resonance in the studio – and when he hits the ‘No, no’ no’ chorus of Ride My Arrow while waiting for Kinsey’s guitar to reach its upward trajectory it’s a truly spellbinding moment.

All this from a man whose entire playbook of stage moves is seemingly limited to: The Shuffle, The Minor Strut and The Rare Spotted Guitar Solo On One Knee. He broke out into The Shuffle at this point of the tune, showing that despite his almost motionless rapture behind the microphone he was feeling it. And as the rapt audience looked on, we could only help but feel the same. He clearly responds to Kinsey’s guitar playing, which is gorgeously lean and taut, as he coaxes every nuance from his Gibson SG – an instrument better known for being played very loud rather than in such a controlled, achingly beautiful fashion.

But there’s no point expecting Callahan to explain himself between songs or otherwise as he’s already doing it in his music. As he expounds in Jim Cain: “I started out in search of ordinary things/ How much of a tree bends in the wind/ I started telling the story without knowing the end /I used to be darker, then I got lighter, then I got dark again.” In those four lines, he effortlessly sums up his stylistic shifts over the years, with his Callahan-named years being certainly some of the ‘lightest’ of them all.

While he does dispatch the heavyweight tunes of America! and Seagull with darkened aplomb, Callahan does leave some room for a bit of fun. He throws two covers into the set, the reflective if tongue-in-cheek Leon Russell classic A Song For You and crooner’s-gem Please Send Me Someone To Love by Percy Mayfield, before seguing into his finale, a bizarre, stream-of-conscious riff on Queen Victoria. “Goodbye to the Queen/ Queen Victoria the first/ Had a face/ Ugly as a purse,” he sang, displaying the first hint of a smile as he joyfully unleashes The Minor Strut before exiting stage right, leaving us to find our own way out of our bedrooms and into the rainy night.