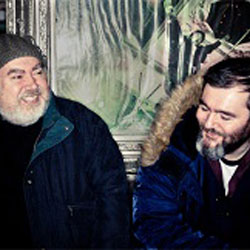 “Well, this is awkward” Aidan Moffat offers to the crowd. He’s been on stage with Bill Wells and band for over a minute but the microphone still isn’t working properly. “Should we go back off or should I just stand here and shout at you?”. For a moment we’re left to wonder whether Moffat is serious, and whether tonight may turn out to be a prickly, bad-tempered affair. Happily however, the technical problems are eventually resolved allowing the gig to get underway.

Everything’s Getting Older by Wells & Moffat has arguably been one of 2011’s most distinctive and original albums, born out of years of patient, painstaking work. The choice of instrumentation, particularly the focus on piano, strings and trumpet lends the music a jazzier, late-night feel while Moffat broadens his lyrical palette to include tales of domesticity and mature concerns intermingled with stories of excess and impropriety. He doesn’t waste a word throughout, arguably delivering his strongest set of lyrics to date. Played live it is a musically unencroaching affair, with the violin, double bass and trumpet rightfully allowing the lyrics and piano to retain centre stage throughout.

As with the album, Wells & Moffat open tonight’s show with Tasogare, a wordless curtain raiser that almost acts like opening theme music to the small stories & mini dramas that will follow. It flows straight into Let’s Stop Here, Moffat’s lyrics delighting in the illicit behaviour of its characters. Ballad Of The Bastard meanwhile is classic Moffat, a poetically morose, brutally honest assessment of male misbehaviour, littered with the minutiae of a failed relationship. At the end he steps away from the microphone to sing along to the tune of the piano, his voice sounding almost exhausted by the emotional heaviness that precedes it. Dinner Time sounds just as paranoid and claustrophobic as on record, both sinister and comic. After playing the concise, sprightly rhythms of A Short Song To The Moon Moffat announces “that’s the happy one out of the way”. Moffat may have slightly moved away from the seedy underbelly and alcohol-soaked tales recounted in Arab Strap songs but pleasingly he still holds an uncanny ability to shine light on the darker corners of human nature.

They make a brief departure from the album to play their cover of Bananarama‘s Cruel Summer. Slowed down and stripped of the glossy female vocals and musical bounce of the original, it stands as a suitably sad song for Moffat’s gruff vocal delivery. After finishing he comments how it reminds him of the line in Hey Jude by The Beatles – “take a sad song and make it better – see where I’m going here?”. It is one of several humorous moments, more of which follow during Man Of The Cloth, another track from the forthcoming Cruel Summer EP. Introduced as an “erotic short story with a Halloween theme”, it recounts the story of a man going to a fancy dress Halloween party dressed as a priest only to, predictably, end up in bed with another female guest.

They return to the album to play Cages, which sees Moffat play a marching drum beat over his lyrics before performing The Copper Top, Moffat’s poignant spoken-word lamentation on the inescapable passing of time and finite nature of life, set to elegiac violin and piano. The peak is reached with Glasgow Jubilee, an enjoyable cavalcade of profanity and debauchery (or as Moffat more prosaically describes it “a song about shagging”) that is built around a suitably sleazy, squelchy keyboard riff. They close the main set with The Greatest Story Ever Told which shows signs of creeping positivity and hope, Moffat marvelling over how “we invented love and that’s the greatest story ever told”. The lullaby-like And So We Must Rest closes the gig, putting the seal on an excellent show that was equal parts beauty, misery and humour.