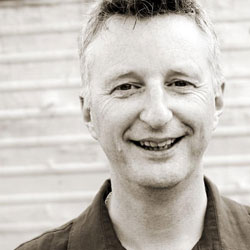 As the title of the show suggests, Looking For A New England is an alternative St George’s Day celebration, hosted by Billy Bragg, the ‘Essex Bob Dylan’ who put the punk into folk music back in the early ’80s.

Following on from a chaired discussion on the nature of Englishness, in which Bragg himself participates, the show is part gig, part political lecture, lasting three and a half hours – even if you don’t sign up for all of his socialist manifesto, you have to admire the man’s energy.

Englishness is a theme that has increasingly preoccupied Bragg, especially in his 2002 album English, Half-English and in his 2006 book The Progressive Patriot. As he explains at the start of the show, he wants to reclaim the English identity and flag from right-wing nationalists, such as the BNP, who ironically flourish in his own hometown of Barking. He argues powerfully for a tolerant, inclusive, multicultural Englishness not a narrow, insular, ‘little Englander’ attitude. As he points out, St George himself was originally a “Lebanese migrant worker”!

The show embodies the ideas Bragg espouses, featuring a rich variety of music, from the traditional Northumberland folk songs of Rachel Unthank And The Winterset, to the Coventry-inspired urban dystopic vision of The Enemy‘s frontman Tom Clarke and the feelgood skiffle/rockabilly of Camden’s Kitty, Daisy And Lewis, before Bragg himself takes the limelight with a set of politically charged protest songs delivered with characteristic passion.

A superb communicator, Bragg early on gets the audience to stand and sing Jerusalem, which he believes should be the English (as opposed to British) national anthem, just as Wales, Scotland and Northern Ireland have their own individual anthems. We are encouraged, in the style of football crowds, to hold aloft our white and red programmes which form a gigantic St George’s Cross in the Barbican Hall.

Bragg’s first guests, the all-female quartet Rachel Unthank And The Winterset – two singers, a fiddle-player and a pianist – produce their own striking arrangements of traditional folk songs about the often tragic lives of ordinary working people from the countryside, enlivened by beautiful vocal harmonies and even a little clog dancing.

In contrast, the early Paul Weller-esque anger of Tom Clarke’s songs reflect a more contemporary city landscape in England. A slight youthful figure with acoustic guitar, he belts out several tracks from his band’s We’ll Live And Die In These Towns album with admirable fervour – with their strong lyrics and musical craftsmanship, they stand up very well to this solo treatment.

Kitty, Daisy And Lewis (two sisters and a brother) show themselves to be versatile and varied, moving seamlessly from skiffle and rock’n’roll to rhythm’n’blues and swing, swapping instruments such as accordion, ukulele and Hawaiian steel slide guitar between and during songs. Played with a fair amount of skill and a lot of energy, this mainly American-style of music – though of course influential on English musicians in the ’50s and ’60s – stretches the definition of Englishness so wide it risks losing any real meaning.

When a heckler questions what Hawaiian-style music has got to do with English culture, he is firmly but humorously put in his place by Bragg, and it becomes a bit of a running joke during the rest of the evening. Having joined in with his guests on a few numbers, Bragg now takes the central role – spatially that is, as of course politically he holds fast to the left.

Metaphorically on his soapbox, Bragg’s radical manifesto on Englishness includes a Bill of Rights and an English parliament, while he urges people not to let apathy stop them voting in the London elections on 1 May so that the likes of the extremist BNP win seats. He gives a moving account of how he first became fired up by social issues as a young fan of The Clash when he attended a Rock Against Racism concert at Victoria Park, Hackney in the late seventies – after that, for him politics and music became inextricably entwined, leading on to him playing gigs for striking miners and actively campaigning for the Labour Party as part of Red Wedge in the ’80s.

Now 50, with receding grey hair, Bragg may have mellowed somewhat since then but there’s still an impressive amount of fire in his belly when it comes to social injustice. You may think he’s preaching to the converted in Barbican Hall but his unpretentious sincerity and commonsensical idealism, together with occasional flashes of down to earth humour, make him a persuasive speaker for socialism – and there’s plenty of entertainment to help deliver the message, so the evening doesn’t become too heavy.

Just like in his early days, with a bullish stance, Bragg sings and plays electric guitar with raw power. He’s never going to win any prizes for musical sophistication but his passion is persuasive. He performs a number of old favourites, as well as more recent and lesser-known songs, including Shirley (about sex and sexual politics), Take Down the Union Jack (a radical revision of constitutional Britain), Sexuality (pro-safe sex and anti-homophobic), There is a Power in a Union (which he dedicates to the striking teachers) and I Keep Faith (from recently released album Mr Love & Justice).

Inevitably, much to everyone’s delight, he performs New England (which, despite its title, is of course a love song not a political statement), with the audience singing the chorus “I don’t want to change the world/I’m not looking for a new England/I’m just looking for another girl”). But the closing number, for which the other artists join him on stage, is the perfect musical illustration of Bragg’s political message this evening: a Negro spiritual that somehow became adopted as the England national rugby team supporters’ song – Swing Low Sweet Chariot.