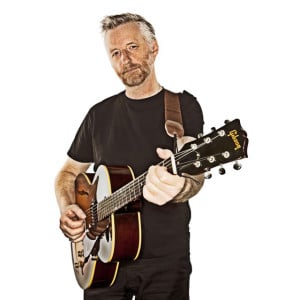 Thirty years after he first emerged from the backstreets of Barking with his uniquely estuarine blend of folk and punk, Billy Bragg’s songwriting skills and social conscience remain as distinctive as ever.

At 55 and nursing a heavy cold that, he informs us, has stubbornly refused to shift, Bragg could have been forgiven for taking it easy at this packed Royal Festival Hall gig. Yet after more than two hours, he was still going strong, fuelled by cups of nothing stronger than herbal tea. During a set that combined material from throughout his career with a range of anecdotes on touring life and his familiar views on class, inequality and the evils of the Conservative Party, he showed why, in his own way, he is one of the most important artists Britain has produced, the nearest we have to our own Bob Dylan or Woody Guthrie.

Backed by a band including a pedal steel player and sporting a cowboy shirt and pointed boots, you could be forgiven for believing that this quintessential Essex boy has, to quote some recent reviews that he was quick to pour scorn on, gone all country on us, especially as this year’s (excellent) Tooth & Nail album continued the deep immersion in American music that has characterised his later career. Yet as well as some of the best tracks from his new record and several highlights from his Mermaid Avenue sessions with Wilco, the audience were also treated to more than their fair share of early Billy classics.

In particular, a mid-show solo interlude featuring the holy trinity of Between The Wars (surely Bragg’s most beautiful song), The Milkman Of Human Kindness and Levi Stubbs’ Tears showed that his peculiarly English combination of self-deprecating wit and acerbic social commentary remains as potent today as it was at the height of the Red Wedge movement in the mid-1980s. As the evening drew towards its conclusion, the whole hall was singing along to the timeless A New England, while earlier renditions of You Woke Up My Neighbourhood and Sexuality illustrated that Bragg arguably peaked with 1991’s Don’t Try This At Home album, the perfect meeting point between the rawer, simpler style that made his name and the more relaxed, musically diverse performer he would evolve into over the coming two decades.

With his formidable back catalogue being so effectively mined, some listeners could be excused for politely sitting through Bragg’s newer songs in anticipation of the next classic from the canon, which is rather a shame when he is still penning tunes as good as Handyman Blues, a languorous but sharply observed reflection on father-son relationships, and the elegantly wistful No One Knows Nothing Anymore.

On one hand, when he reappeared for an encore of There Is Power In Union, Tank Park Salute and the inevitable, ultimate Billy crowd pleaser Waiting For The Great Leap Forward, it was hard to deny that sometimes the old songs are still very definitely the best. Yet with a Fire Brigade Union banner proudly mounted behind the drum kit in solidarity with their members’ ongoing strike action, Bragg reworked his most strident rabble rousing anthem of all with topical references to, among others, Pussy Riot and Russell Brand, proving that even after all these years, he is still eminently capable of finding fresh things to say.