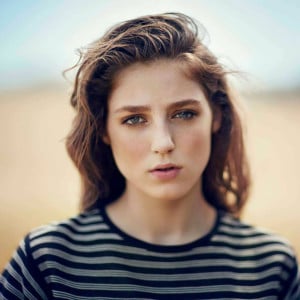 Birdy takes a few tentative steps onto the side of the stage and sits at a baby grand piano, illuminated by one spotlight that makes it and her glow golden, cosy in the corner. She opens wordlessly with Shelter, and it sounds like a request – an intimate request for kindness from one girl to her audience of 2,000.

From up in the gods – in the crow’s nest, shall we say – she looks tiny and fragile, a little birdy indeed, tucking herself into the corner of the stage because it’s too vast a chasm for someone so diminutive to fill.

But her voice soars up and over the music, talent pouring out of her despite herself, and if it’s all a bit predictable, a bit middle of the road, then we can be kind to her and remind ourselves that she is only 17.

A drumbeat strikes up out of the darkness to introduce second song Young Blood and the lights burst forth to reveal an entire band scattered across the stage. With this surge in energy and her flock arriving to join her, Birdy looks more confident, her body language straightening and unfolding, her stature beginning to match the voice.

Black and white visuals flit across the backdrop, with a set of huge round buttons acting as the only permanent props. Could this be a surreal allusion to her recent crowning as the face of Gap? A line of beige buttons that might adorn a pair of woman’s chinos.

And beneath these symbols of boring middle-aged casual wear, the band play an homage to a string of drive time perennials: Alanis Morissette, channelled through the slight angst ballad Strange Birds; The Cranberries resuscitated on All About You, waking up in the bed next door to The Corrs; Christina Perry’s Jar Of Hearts filtered through Coldplay on Standing in the Way of the Light; Dolly Parton on Older, a country-lite number on which Birdy sings, indeed, that she wishes she were older – something never wished for by anyone above the age of 21, and definitely not wished for by Dolly Parton. Birdy’s voice is so much stronger than Dolly’s, building and swelling into a huge great swooping eagle of thing, eliciting whoops of delight out of the rapturous crowd; but her lyrics are so much weaker, so full of rain, pain and platitudes that we wish she were older too – old enough to have experienced any of the stuff that she is singing about.

The buttons burst into life and it transpires they are floodlights, not buttons at all – so is the resemblance accidental, and we’re not supposed to think idly of chinos and polo shirts while Birdy trills about angels and lights and kisses?

During the finale, Wings, slow motion footage from a wedding scene plays across the backdrop of buttons, a black and white bridal party running through a field, a magazine shoot dream projection of what love should look like, with a soundtrack provided by a 17 year old, styled by Gap. It’s all very competent, polished, shiny and solid, but it’s boring, contrived and unconvincing. There are moments of personality that crack through the veneer: the wounded non-apology of No Angel, and Skinny Love, her biggest hit and the encore for this evening is a cover version.

Undoubtedly Birdy has musical talent in spades, but it is telling that her first album was of covers and that her second is stuffed with shared writing credits. At 17, most teenagers spend their most creative moments scheming to get into the pub and each others’ pants. When Birdy comes back from an international adventure with a broken heart, some scars and a mild tropical disease, maybe then her music will soar like her namesake.