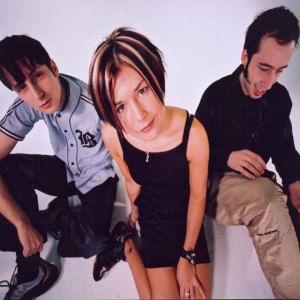 THIS MUSIC MADE ME: Bis

In at least some ways, not much has changed in the 20 years since bis released their debut album, New Transistor Heroes. As they go on stage this afternoon at the Lexington, the crowd is excitedly chattering, crushed up against the stage, kitted out in floral frocks, plastic hair clips and classic band t-shirts. A few are glugging from bottles.

But these bottles are Fruit Shoots. Those who’ve pushed their way to the front average about five in age. For this is a Sunday matinee show. Welcome to bis 2015.

It’s a smart idea, and it seems bizarre that, as more and more bands of yesteryear are reforming, this sort of thing doesn’t happen more often. “When you grow up, people are going to ask you who your first gig was… and then they’ll say ‘Who?!'” Steven tells the engrossed front row, who are already eyeing up Manda’s recorder. As well as the small people throwing shapes at the front, there’s a fair smattering of even tinier babies in slings, strapped to the fronts of 30-something indie kids, delighted at being able to see their cult favourite without having to shell out for a babysitters – and be home by 6 to boot.

The band take all this into account, and their set is comprised mainly of golden oldies and hyper-pop for dancing while off your face on cola bottles. It’s great fun, but also a bit of a shame, because their most recent album, data Panik etcetera, was a brilliant update on their trademark sound. Bis 2.0 if you will.

There’s plenty for the grown ups though – and not just the inevitable F-bomb, which slipped through the lips of amortified Steven, who attempts to cover up his faux pas by urging the rest of the band to quickly start the next song. They open with Making People Normal; they give Statement of Intent its first ever live outing; while School Disco, Eurodisco and Secret Vampires get the adults replicating a few of their offsprings’ moves.

The newer tracks that sneak their way into the set – Minimum Wage (“This is something that won’t exist by the time you grow up”) and Rulers and the States – fit in nicely but are notably more sophisticated. A clash of nu-wave pop and disco, it’s a marriage of their second and third albums; Social Dancing’s glossy electro-pop and Return To Central’s more experimental digital sounds – with lyrics they wouldn’t have dreamed of pencilling way back when. It’s still distinctly bis, but after all this time, it’s nice to have something new…and to feel like the band have grown up with you.

Monstarr – an angsty rant about the the media’s obsessions with image, even back in the mid ’90s – performed by a bouncing Manda, equipped with megaphone, and Steven’s Huggy Bear t-shirt serve as a reminder about how, for all their cartoonish image and twee lyrics, bis were integral in making riot grrrl and pop punk accessible back in their day. For many they were a door into this exciting, exotic world of American bands. That this relatively obscure Glaswegian band can still pull in sell-out crowds (including another show at the same venue later tonight) 20 years after they first started cutting and pasting ‘zines and pressing their own cassettes, is testament to the special place they have in many people’s hearts – and their enduring silliness.

They close with Kandy Pop – which proves to be toddler crack – before an encore of their theme from the Powerpuff Girls which, John admits, “We certainly won’t be playing tonight”.