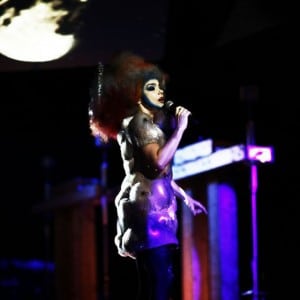 Björk‘s Biophilia tour set off around the world following its premiere at the Manchester International Festival, two years ago. Only now does Iceland’s shiniest star reach London; and in the time between the David Attenborough-introduced set has gone through both changes and consolidation. Tonight’s complex in-the-round show, replete with tesla coil, gravity harp and an all-female choir in flowing shimmery gold and blue gowns, ought to be faultless. At Alexandra Palace, a venue long associated with broadcasting entertainment and education, video cameras are at the ready to capture the evening for DVD release posterity.

Björk and her sizeable ginger frightwig take to the stage in front of the choir – all of their rears to our seats initially, with iPad controller Matt Robertson and percussionist Manu Delagu both somewhere beyond. But, as if in mimic of the tectonic plates and microscopic lifeforms that form the core concept of the groundbreaking app-led Biophilia album, they rarely cease moving from there on in.

The set is naturally predicated on Biophilia, its tracks introduced lullingly by Attenborough’s disembodied voice. Of these, Crystalline, Mutual Core and Cosmogeny acquit themselves best; the first finds Björk flummox-dancing, like a music box ballerina who’s declared independence from her box and is discovering how her legs work (before everything breaks down into a drum’n’bass mash-up for its final half-minute); the plinky-plonky hooks of this song – as well as Virus and Moon – add to the wide-eyed-at-the-world innocence. Above the stage, an octagon of double-sided televisions alternatively broadcast animated video footage, choice cuts from Attenborough’s shows and opposite sides of the live performance. With the tesla coil in its protective cylindrical cage flying in and out as required and Björk using every inch of the stage to perform to each corner of the massive though tonight strangely intimate room, no two moments in this show are alike.

The tesla coil takes centre stage for Thunderbolt, its captured lightning harnessed to a corner bank of gizmos, the cage suggesting temporarily tamed primal ferocity. In another corner of the stage the swinging pendulums of the gravity harp fire up much later in the gig, while the gamelan/celeste hybrid occupies still another corner. The stage looks harmonious and a little alien, if not quite symmetrical. Rather like Björk herself, whose alternately jagged and cooing vocals work well with these concepts, her characteristic growls and howls punctuating and persuading on sweet melodies that are rarely straightforward yet often have the quality of lullabies.

Mutual Core, on record a welcome blast of beats and bass, is live a feast for the eyes as well as the ears; aurally, Matthew Herbert and 16bit‘s propulsive beats fuse fabulously with the choir’s extended crescendo, while on stage the video relates riotously colourful volcanic eruptions of some violence above the choir, who rise from a seated huddle to fling themselves about with abandon in expressionistic interpretation of the music. It’s a thrilling moment. There is room too for choice cuts from her extensive back catalogue; Isobel is a revelation, fitting snugly into the Biophilia material; Possibly Maybe is girlishly sweet, while the gorgeous Hidden Place, from Vespertine, proves to be a rare treat with the choir in full flow over the backing tracks, which cause a burble of audience recognition to ripple around the room from its first bars.

At the evening’s start a live announcer had requested cameras not be used, and the venue enforced the policy. It was a little ironic then that three technical problems caused songs to be repeated for Björk’s own filming purposes; she and her players even had to leave the stage at one point while gremlins were banished. In a show two years old, this was both surprising and momentum-sapping. Yet with Solstice, accompanied only by the gravity harp, she underlines how tender her powerful, idiosyncratic voice can be; by its end, technical hitches in search of perfection are easily forgiven.

This none-more-quirky show ends with the forceful Declare Independence, which she dedicates to the Faroe Islands and Greenland this time; the thumping bass and beats feature the final appearance of the tesla coil, and by this point sizeable portions of the audience have left their seats to dance as near to this still-extraordinary presence as decency allows. It’s a reminder that, for all the grand nature concepts and created instruments, ultimately Björk remains the inimitable star shining brightly at the heart of her own system.