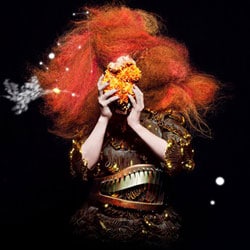 With all the talked-about multimedia visual shizzle (and the inevitable and slightly nauseating gadget product placement), the thousand or so lucky people in the specially-converted Campfield Market Hall would be forgiven for thinking that Björk (the singer/songwriter) would be something of a sideshow or a by-product of the production as a whole. Wrong. Completely wrong. If ever there was an illustration and aide-memoire of the beauty and uniqueness of her voice it was Biophilia. For all the Tesla coil lighting bolts, huge plasma screens, rebuilt harpsichords and swinging pendulums, it’s really the strength of the songwriting, the violent elegance of the Björk’s yelps and screams, that transfixes this partisan audience.

It’s easy to lose track of how many times an audience member shouts out an “I love you!” or a “Björk! Woooo!” Giddy and uncontrollable outbursts are, one imagines, the norm for Björk. She is, after all, Björk. There are very few more recognisable women on the planet. As has been mentioned elsewhere, before there was this generation’s more dilute, apparently more palatable bunch of pop expressionists – Lady Gaga, we’re looking at you – there was Björk. And there is Björk! She’s as recognisable among the large troupe of singing ladies on the stage as it is possible to be. It’s as though the make-up staff had been working on our heroine’s hair with one of the Tesla coils. It stands, outward and upward; a sort of anti-gravity mass of coiled orange fluff. It suits her.

Before Iceland’s most inimitable citizen makes it to the stage, the four banks of terracing that face the “in the round” space are shrouded in darkness. Thankfully, the least frightening, most lovable person in the universe – obviously, David Attenborough – starts talking about, well, the universe. It’s a fairly loose explanation of the Biophilia concept. That is, the connection of music to all things, be it DNA strings, wild sea monsters, blood cells, the earth’s core and other such worldly imaginations based on fact or otherwise that beam out as visuals on the many large screens. The visuals themselves are stunning and beautifully conceived, and certainly provide augmentation to Björk’s newer, more thematic material. But you can’t help but feel this was an opportunity to do something even more spectacular that was slightly lost. While this isn’t a call for Michael Bay-esque exorbitance, a 3D light show, or something of that ilk (done tastefully and well), would catapult the show into unforgettable territory.

Ultimately, it matters little. It’s the human spirit of Biophilia that shines the brightest. The Icelandic choir that supports Björk for the majority of the set are a wonderful addition, adding harmonic depth and a greater emotional resonance to the sometimes quite brutal, primeval shrieks coming from the little redhead. The choir of around 20 also helps the performance engage with the crowd, occasionally turning as one to suddenly face a bank of terracing that may have felt neglected. But no one ever feels forgotten, with each mini-audience getting their chance as the group on stage revolves, song by song. It gives the performance a special kind of intimacy, especially for one involving more than 1,500 attendees.

Counteracting the quiet sense of intimacy is the regular percussive, neo-industrial thud of new tracks like Crystalline, Thunderbolt and Mutual Core – all pretty successful attempts to sonically recreate nature with the force of music. The world is a wild and fearsome place, and Biophilia is keen to reinforce that. Other new tracks – Moon, in particular – are far more thoughtful and meditative, akin to the more ethereal world created on Vespertine. It has to be said, two hours of Biophilia alone may have felt like a considerably longer stretch. Typically Björk-esoteric, Biophilia’s unrestrained, ambitious M.O. will take some growing into.

Happily, tonight is about the loyal fans, too (and there’s a lot of them). Frighteningly-brilliant versions of some of Björk’s most beautiful and profoundly powerful lullabies, namely Isobel, Hidden Place, Juga, Human Behaviour, Unravel and a quite wonderful It’s Not Up To You, are the appropriate punctuations to Biophilia’s quiet and complex intensity. One of nature’s greatest forces, Björk shook the world tonight.