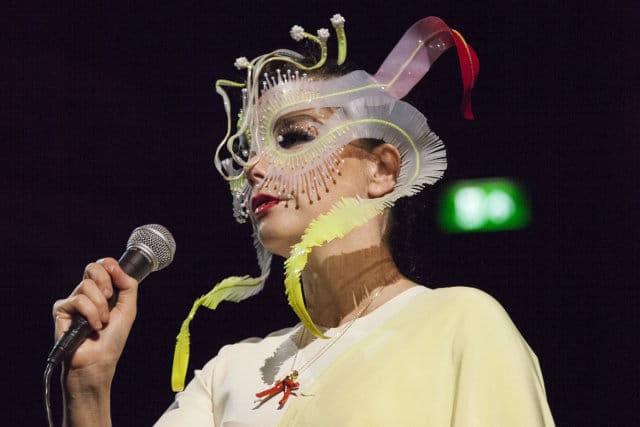 The relationship break-up origins of Björk’s ninth album Vulnicura birthed not only a masterwork chock full of gutpunchingly raw lyrics but, just months later, a reworked version, Vulnicura Strings. This later edition stripped out the mother album’s beats and other technological concessions to the modern world laid down with producers Arca and The Haxan Cloak, focusing instead on that none more idiosyncratic voice and the ebb and flow of the music’s melodic and harmonic structures. In making it, she wanted to become a “violin nerd”, having found that arranging strings gave her focus at a time of desolation.

Tonight, at the outset of the first of two interval-split sets in the venerable Albert Hall, the stage is set up for what might be a Prom; the Aurora Orchestra, helmed by Andrew Gourlay, are in unobtrusive, serious-muso black. Unlike on the Biophilia tour, with its extravagant custom-built set-piece instruments and musicians, here are no distractions; no visuals, no electronics, nothing to get in the way of the music and its singular creator. Björk’s deceptively simple outfit of whites and creams is topped off with a striking UV-augmented, embroidered mask complete with tendrils that veer away from her face. The effect is of a delicate flower, blooming in the midst of darkness. This is Björk at her most straightforward, and most vulnerable. It is accordingly from Vulnicura Strings that tonight’s arrangements take their cue. 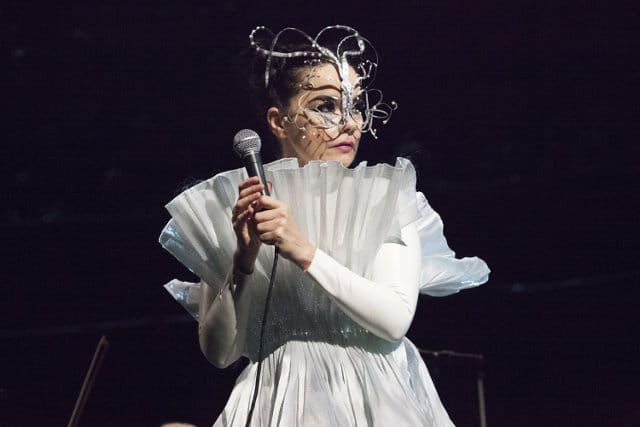 Across town at Somerset House the Björk Digital exhibition showcases technological aspects of Björk’s groundbreaking multimedia innovations down the years. Part-career retrospective and part-showcase for her latest ideas, it features a double-screen surround-sound installation for the 10-minute-long Black Lake, filmed in and around a lava tunnel, and 360-degree virtual reality scenarios for other tracks. The epic Notget finds Björk rendered as an interactive, bioluminescent moth giantess, who via the mantra “Love will save us from death” grows from a tiny, wounded creature at the outset into a huge, striding, purposeful figure with whom you do not mess by its conclusion.

Set on a volcanic-black Icelandic shore, the heart-rending album opener Stonemilker brings Björk’s intense, inquiring stare in close as she finds that “Moments of clarity are so rare,” and with devastating honesty decides “I better document this” and demands “emotional respect” for her “emotional needs”. She is the only focus in an otherwise barren world that emphasises the prime importance of human interaction. It is this track which opens the first of two interval-split sets this evening and, shed of its electronics, it presents its emotions in their rawest form. 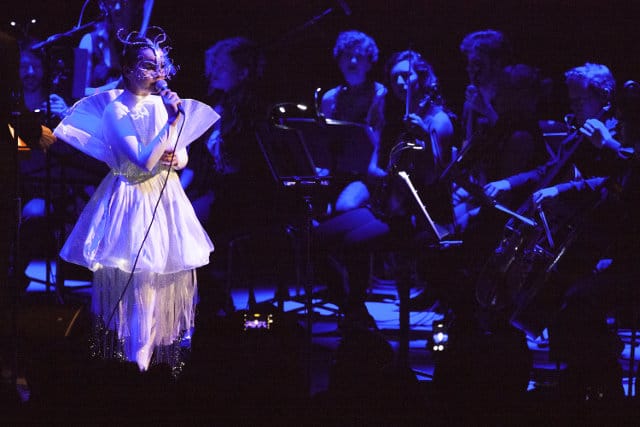 What follows is pure, human yet otherworldly Björk. Her extraordinary phrasing of extended bridges and curiously placed breaks sound never more technically or uniquely brilliant, yet simultaneously so fleeting. Her curious rocking shuffles suggest an internal rhythm present in place of synths and drums. She reaches out, almost childlike, to the audience and, in Lionsong, possibly things beyond its ken. A heartbreaking song essentially denying the end of love, it finds her trying to find a way back to where love was, but eventually takes charge of the situation: “I refuse, it’s a sign of maturity/ To be stuck in complexity/ I demand all clarity… Maybe he will come out of this/ Or he will feel solitaire/ Somehow I’m not too bothered/ I’d just like to know.” The strings underline the turbulence of the lyrical emotions, in no way undermining. It’s not a little operatic.

This first set consists entirely of Vulnicura tracks, several of which extend to uncompromising lengths, most especially Black Lake, with its repeated collapses to a single long note. The device catches the audience out repeatedly; some applaud after each verse, assuming the end has come, only for hushed silence to descend once more. Subtitled ‘2 months after’, the track attempts to take perspective on the break-up, but with lines like “Our love was my womb but our bond has broken/ My shield is gone, my protection is taken/ I am one wound, my pulsating body/ Suffering be/ My heart is enormous lake, black with potion/ I am blind, drowning in this ocean” it is as drowningly dark as its title suggests.

Any expectations of a change of mood in the second set were dashed as she reappeared, following the Aurora Orchestra back on stage dressed as a luminescent jellyfish, floating-shuffling in a night-time ocean. And those shuffles make sense at last – the jellyfish, surely, is the creature whose internal pulsing rhythms are closest to her own in this material – floating free, alone and directionless, unanchored, in the vast abyss, buffeted by currents. Curiously, Pagan Poetry fits in completely with that rhythm, and the reaction of the audience suggests its parent album Vespertine – released at the beginning of the relationship whose end Vulnicura documents so devastatingly – remains deep in affection. When the strings drop out for the repeated phrase “I love him,” it’s as though the entire room wants to envelop her in a huge hug.

Fittingly given the name of her backers this evening, she also plays Aurora, from the same album, and Joga from Homogenic. And there’s a rare performance of I’ve Seen It All, from the Lars Von Trier film in which she starred, Dancer In The Dark and its attendant soundtrack, Selmasongs. There’s pointedly no male collaborator to sing with this time, and the song assumes an extra layer of loneliness in consequence. The set then returns to Vulnicura for its end, with Quicksand and Mouth Mantra, the latter of which in particular works better in this stripped-back form.

An encore of The Anchor Song from Début, and Plutó from Homogenic winds the evening to its end. The latter is her fastest, most thumpingly rhythmic song, yet here it is performed by Björk and her string section alone. Such a set-up shouldn’t work, but long after the musicians have left the stage the audience is thundering the refrain, stamping on the venerable Victorian venue’s floors and demanding more, refusing en masse to leave. Eventually she heeds their calls with thanks and to say that, no, that really is all she has. There’s more at Somerset House, and there will be more in the future, but tonight she has wrung her heart and given all she, or surely any of us, could.