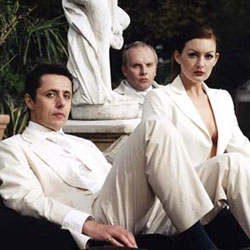 I first heard of Black Box Recorder because of The Auteurs, and I suppose I’m not alone. That band’s front man, Luke Haines, co-wrote all but one track of Black Box Recorder’s debut album England Made Me with John Moore and was further credited with co-producing it and playing “instruments”. Being rather partial to The Auteurs, if truth be known, and loving the savvy England Made Me as well meant that I had been anticipating this gig for weeks.

Yet considering the cross-pollination of personnel between the two groups (Haines aside they also share producer Phil Vinall and the other two-thirds of Black Box Recorder sang backing vocals on the latest Auteurs album, How I Learned to Love the Bootboys) they both manage to maintain their own seperate musical identities.

So it was that support act The Paradise Motel were politely clapped away and the main business of the evening (unless you consider headliners Smog) began in earnest. All three bands at this gig were warming up for the Carling Weekend (that’s the Reading and Leeds festivals to you and I), but from Black Box Recorder’s set you would not necessarily have easily figured this out; this was to be a very slick set indeed.

We watched dusk fall through stained glass windows and observed strange shadows forming and dispersing against the gothic interior of this most eerie of venues, half-expecting black and white celluloid zombies to appear and steal our souls when, deadpan and sultry, lead vocalist Sarah Nixey announced to the assorted sacrificial victims assembled before her that they could buy official mugs from the official mugs sales assistant in the foyer.

The timing of this throwaway one-liner was spot-on and threats of zombiefication, at least for now, were pushed back whence they came as the audience began to appreciate what they were in the presence of. Zombie she isn’t, but Sarah Nixey has a beautiful, calm voice which sings quietly edgy lyrics, especially on Child Psychology (“Life is unfair/Kill yourself or get over it”). All of this, coupled with Haines actually SMILING at the conclusion of finale Lord Lucan is Missing confirmed to sceptics everywhere that this band have no intention of communally slitting their wrists just yet.

Sounding even better live than on CD, at least at this venue, Up Town Top Ranking – something like Pulp‘s This is Hardcore played by Massive Attack – England Made Me, Lord Lucan is Missing and Child Psychology were highlights for me, and by the time the audience shouted requests for an encore (these went unheeded) it was clear that Black Box Recorder are a great deal more than simply an Auteurs side project.