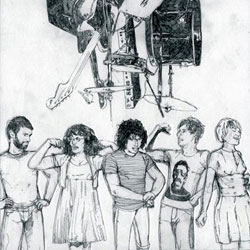 This gig follows three gigging patterns that have of late begun to emerge in London town. First, it’s headlined by a band called Black something. Not Black Lips this time, nor Black Ghosts, but Black Kids.

Second, it’s the second free 93 Feet East gig in under a fortnight that’s seen a queue of wannabe audience members forced to snake down Brick Lane and round side streets. (The last one, of course, was Radiohead.)

And finally it’s the latest to feature very prominent sponsorship. Top Shop have a neon bar sign and projected visuals to underline how cool they feel they are now that they’re allowed to associate their name with Vice.

When it’s all free it’s churlish to whinge on about such things. But make no mistake, this is definitely Vice’s night. You can tell, because the international media conglomerate’s logo and name is everywhere too. Officially it’s Vice’s “private party”, as part of their latest tour of hot young things. Of the three acts playing tonight, only one has so far released a single in this country, but Vice’s snazzy band marketing made it the place to be.

The last Vice-backed tour featured the rather ace line-up of Crystal Castles, These New Puritans and The Teenagers, all of whom are in various stages of releasing and touring their music still and all of whom were well worth a gander. Thus it proved tonight, as the packed throng greeted Ipso Facto to the stage.

If Karen O and Theoretical Girl between them had contrived to style Electrelane, they would have looked like this. With (almost) identical hairstyles and subtly fashionable attire, the four girls with the Latin moniker were poised throughout their half-hour set. The bassist toiled with an instrument at least two thirds of her own size – maybe that’s why she never once smiled.

An unbranded keyboard (Vice and Top Shop missed a trick there) found its samey Horrorsesque goth-lite sound to the fore. At the back, a different colour of hair bobbed about above the drums. Centre stage stood more poise and style, this time with a guitar and a microphone. The songs were atmospheric enough, but at the end of the set it was a struggle to remember any of them individually. Ipso Facto have the style but they’re not quite there with substance.

Friendly Fires‘ material, by contrast, is memorable. And with relentless touring, they’re turning into a seriously decent live proposition too – up close and personal in a gig venue they’re far superior to their recordings in the public domain so far, and not just because they stick a hoover up a guitar and waggle maracas about. But whoever decided to stuff singer/gizmologist Ed Macfarlane into a wooly jumper to play a gig presumably has a sideline in Chinese water torture. Within moments of the set opening his curls dripped sweat – and no wonder, for the second track was the unforgettable Paris.

They’ve changed their set around since last these eyes saw them, but cowbell is still to the fore (this is always a good thing, as all DFA fans know and can testify). Photobooth, an earlier track, didn’t quite cut the mustard but their fans knew it and sang along, and Macfarlane’s vocal histrionics held attention. A sped-up version of The Source‘s You’ve Got The Love, retitled and reworked as Your Love, had the whole place jumping.

Crossing the pond from Jacksonville, Florida, our five-piece headliners Black Kids have found themselves tipped by just about every tipster as Ones To Watch in 2008 (including musicOMH). Front man Reggie Youngblood’s gargantuan ‘fro emerged first, silhouetted, to whoops from the audience – and this wouldn’t be the last hint of a band in thrall to the sounds of Motown as much as indie schmindie. Keyboards diva Ali Youngblood, a vision centre stage and lending her considerable pipes to vocal harmonies, is the spitting image of a young Chaka Khan. She grinned delightedly throughout, clearly loving the audience’s reaction.

Like the missing link between Bloc Party, Arcade Fire and The Go! Team, Black Kids are set to help define 2008’s musical direction. As yet unsigned, they gave away their EP from their website for free, ensuring a good portion of tonight’s crowd already knew their songs. Strangely they’re set to support Kate Nash (and, less strangely, Sons & Daughters) on tour soon. But this was London’s first chance to catch the band in a headline spot. Most memorable number I’m Not Going To Teach Your Boyfriend How To Dance With You is one of those tracks that, once it achieves decent airplay, will surely become ubiquitous.

It’s early days for Black Kids – the band has existed for mere nanoseconds. But the signs are already pointing towards big things. “They told me London didn’t dance,” challenges Ali, grinning all saturnine. For the most part, it did tonight.