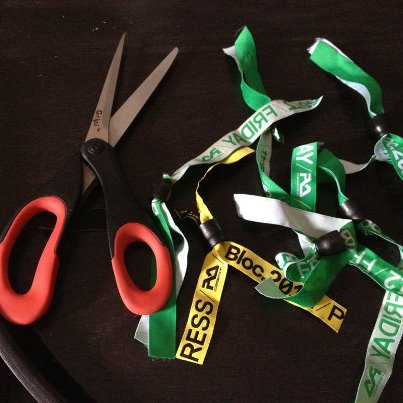 We had expected to bring you a review of Bloc 2012, but we were only able to see three performances on an utterly miserable evening. There isn’t much to say about the music. All the talking points about Bloc will centre on how and why a weekend, which promised so much, descended into such a failure.

By now you will likely have heard the festival was shut at 1am on the first evening due to “crowd safety concerns”. We felt it important to document what we experienced and witnessed.

Upon arriving at 7pm we were informed by DLR staff to exit the train at the station before Pontoon Dock due to “overcrowding”. After a short walk, a large queue was already snaking its way from the main entrance of the London Pleasure Gardens onto the main road. We heard from our friends inside it was taking over an hour to get people in.

We managed to gain quick entry at the press desk but the staff scanning our tickets were having problems getting their equipment to work. Making our way to the arena areas, the three key stages, the Main arena, the Resident Advisor tent and the MS Stubnitz were all situated next to each other on the east side of the site – along with the toilets, bars and food stalls.

The Stubnitz was the marquee fixture of the event, an old East German trawler borne of the Cold War era that was to house the finest in bass music this evening. Already at such an early time it was full, crawling with bodies and resembling an overflowing refugee boat.

The west side of the site had a cocktail bar and an area for production enthusiasts to play around with Ableton kit… and not much else. Everything of interest was bundled in close proximity of each other on the east side, which was starting to swell with the concentration of people building up in these areas.

The Resident Advisor stage was heaving at 8pm for Nicolas Jaar. It was a squash and very sweaty but worthwhile as Jaar delivered a well received set. There was a crush to exit the tent, which made you wonder what the place was going to be like with Ricardo Villalobos and some of the much bigger names appeared. Immediately upon exiting the tent we hit the bottleneck of the mammoth queue leading to the main arena for Amon Tobin. What would it be like for Snoop Dogg or Richie Hawtin?

We made for Appleblim in the Carhartt Dome, colourfully described by one punter as looking like “a large white nipple.” Size wise it had capacity to hold around 500 people. The acoustics were horrendous. And this was where Art Department and Jamie Jones were due to play later.

By 9pm the grim reality of the situation began to unfold. Every tent had a large queue; there was little chance of gaining entry to anything. The site was reaching (exceeding?) capacity and there were still thousands of people outside waiting to get in. Reports came through that ticket scanners had broken down and staff weren’t sure what to do. We attempted the Resident Advisor stage for Shackleton but the entrance was backed up 30 deep with no semblance of a queuing system in place.

There was nowhere to see a performance without a gargantuan queue. It was cold, a pint of Becks was 5, and fairground rides had zero appeal and occupied space that may have better served as stages. By 11:30pm a few of our group gave up and decided to head home, incensed at the situation, as entry to the main areas was cordoned off.

When it reopened later we decided to try the Resident Advisor stage once more to get a spot for Sandwell District. After queuing for 20 minutes there was a crowd surge and we managed to wriggle in. The tent was nearly full and sweltering. Those lucky to be inside were in good spirits as Xhin served up an energetic techno set.

Word began to reach us that the police had stopped entry to the festival and were shutting it down. Xhin was called off stage for a few minutes and returned to carry on during what should have been Sandwell District’s slot. At 1am the music stopped and the police entered the tent to clear it out. Everywhere there was utter disbelief and anger. Snoop Dogg’s headline slot had been pulled and artists including Richie Hawtin were locked down in the backstage area until 3am before being allowed to depart.

One of our party had friends who had flown in from Norway and rented an apartment nearby for the weekend. We heard of others who had travelled from Germany and Spain cursing their luck. A horde of people were banging on the shipping containers and a few decided to scale them to provide some light-hearted defiance in the face of such a sorry situation.

Fearing we would be marooned in the outer reaches of Docklands, it was a relief to know buses had been laid on to return people to central London. An hour of pushing and shoving punctuated attempts to catch one, and we eventually boarde, to cap a terrible evening.

“By now everyone will have heard that Bloc 2012 was closed due to crowd safety concerns. We are all absolutely devastated that this happened, but the safety of everyone on site was paramount. Given the situation on the ground, we feel that it was the right decision to end the show early. Bloc will not open on Saturday 7th July so please don’t come to the site. Stand by for full information on refunds.”

It’s interesting that the statement stops short of an apology at this point. How such a calamity manifested remains a mystery. BLOC are not new to putting on events, nor are the owners of London Pleasure Gardens. They knew exactly how much floor space they had on site, they knew exactly how much of it was occupied by stage space and they knew how many tickets they were selling.

There are unconfirmed reports the rather inappropriately named ticketing company Crowdsurge may have had problems with allowing multiple tickets to be printed and barcode scanning failing at the entrance. Whatever the truth or otherwise of that, the queuing system implemented at the entry gate certainly needed more staff and more than eight lanes. Using different security firms didn’t help matters either. We received reports staff were unsure of what ticket was valid and searches at the entrance were being done multiple times. This prompted people to eventually jump barriers and force their way into the site. Staff became overwhelmed and it meant a chaotic situation escalated into a dangerous one.

This could have all been avoided with planning and organisation from management. On the evidence of what occurred, they didn’t do the math and must bear ultimate responsibility for this debacle.

Attendees have taken to the social media sphere in droves to vent their feelings. See #bloc on Twitter and the Bloc Facebook page for more.