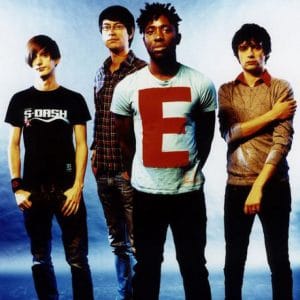 The Teenage Cancer Trust performances are back for another year at the Royal Albert Hall, and as well as continuing to raise great amounts of money for troubled youngsters, they’re still attracting some of the biggest names in music.

Over the years, we’ve seen the likes of Oasis, Coldplay and Franz Ferdinand take to the stage in the name of charity, and tonight witnessed lauded Londoners Bloc Party headline a complete sell out, with Scottish rockers Biffy Clyro and current indie darlings Mystery Jets in support.

For the latter, there was always going to be a danger that their ramshackled musical arrangements may be something of a lead balloon on an occasion such as this, but their typically entertaining and eventful set was met with polite applause all round.

To their immense credit, it must be said, they were totally unfazed by the foreign audience, trawling through highlights of their album Making Dens with a great flair and composure. When they closed with an exuberant run through of Alas Agnes, which saw each band member in full throttle, there were few who weren’t nodding their heads in approval.

Widely regarded as more emo than indie, Biffy’s presence here did seem something of an anomaly. Any notions of pigeon-holing aside, however, it was very difficult to find fault in their performance. Their songs are complex in nature, often veering from intricate guitar notes to bone crunching riff to shouty, then melodic vocals. This was not always a crowd winning formula, but when they did hit the right notes, on Justboy and set closer 57, it was rather compelling.

After a short visual presentation to inform the audience where exactly their hard-earned money was going, it was then time for Bloc Party to round off the evening’s proceedings. Their recently completed fan-club tour of the UK saw them air selections of newly penned material along with old favourites, and tonight proved to be a continuation of this trend.

Opening with the recently coined Waiting For The 7.18 was a bold move. It’s not often bands are afforded such a luxury as to kick off a gig with an unknown song, but Bloc Party managed to pull it off in some style. The fact that it’s an expansive, big sounding, beast of a track complete with some wide reaching vocals courtesy of Kele Okereke certainly helped, but it was performed with the enthusiasm of a child wanting to show you a new toy, something which the audience acknowledged with deafening cheers.

And whilst all the rest of the five newbies were massively promising (be it the distorted onslaught of Hunting For Witches, or the relatively poppy Wet), it is Uniform, which appeared mid set, that will take them to a whole new level. Seemingly a protest against apathy in modern society (“We’re so bored, so entertain us, tell me a joke”), it begins softly, in first gear, before bolting into fifth halfway through, not forgetting to include some wildly taut riffs and a suitably anthemic refrain. A recorded version should be their defining moment.

Of course it wouldn’t have been complete without the crowd pleasers from Silent Alarm – and in realising this, they provided us with sterling, sing-along friendly renditions of She’s Hearing Voices, Banquet and So He We Are amongst others, the latter proving to be particularly sky-scraping. In all cases guitarist Russell Lissack and drummer Matt Tong ably displayed why they’ve come to be regarded as up there with the big guns in their respective departments.

In between, there was the usual friendly crowd banter, including a story about the last time Kele played here, with his school choir. By his own admission, it was this evening’s performance that took the spoils, and it wasn’t difficult to see why – in their set of around an hour, they proved yet again that they’re one of the most vital and relevant bands around, with an arsenal of songs to rival almost anyone. On this evidence, their new album will see them go stratospheric.