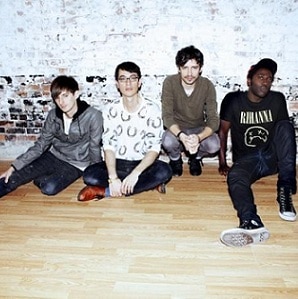 All good things must come to an end. And so it was that the last UK legof Bloc Party’s much-anticipated comeback tour rolled into Cambridge.Greeted by an eerily-lit blue backdrop, 1,800 fans piled into Corn Exchange for the climaxto Bloctober.

Theme Park provided a nice warm-up for the faithful – some of theirsongs are already radio-recognisable, and it was good to see new talentgetting a warm reception. Nevertheless the fans, after waiting for twoyears, were here for one thing only. Stoked by anticipation, theopening was magical. Multicoloured lasers and a low bass whipped the crowdinto a frenzy before Kele Okereke and his gang emerged, launching into a couple ofnewer numbers, but it wasn’t until they reached into their back cataloguethat things really kicked off.

Despite Kele’s occasional ribbingof ‘new’ fans unfamiliar with the older material, said newcomers seemedthin on the ground. Hunting for Witches, against a Halloween-greenbackdrop, went down a treat. Slightly underwhelming guitar levels andfluffed lyrics were more than made up for by a crowd determined to singalong no matter what. Meanwhile, Positive Tension launched a mosh pit thewidth of the auditorium, while Song For Clay emptied pretty much every pintglass in the building.

The new stuff went down reasonably well too. The bouncy, uplifting Real Talk suited Kele’s chilled style, and Octopusreached a comfortable performance. Most importantly, Kettling was nothingbut huge. The clear fan favourite from new album Four, it even hadthose in the VIP boxes moshing. The only slight distraction wasthe band’s bizarre stage presence. Kele was so laid back and confident itseemed he didn’t realise there was anybody else in the room. Yet a few feetto his left, Russell Lissack on guitar was uptight, intense and earnest. It waslike watching two bands at once.

Yet ultimately, the music wasgood and the fans got into it. A magnificent second half, comprising ThisModern Love, a version of Flux which smuggled in some Rihanna, andHelicopter for an encore, whipped the crowd up to fever pitch. Bloc Partystill have it – look out for them next summer, their presence could well bethe highlight of any festival.