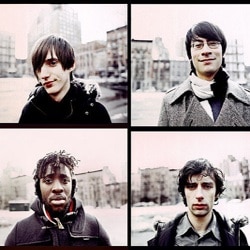 This had the potential to be a bit of a struggle.

Never the greatest of live acts, always a little stilted and awkward, clutching two albums probablybest described as difficult – the much maligned modern ennui of A Weekend In The City and the deeplypersonal / brave new sound of latest Intimacy – it could be horrible.

Or it could be not horrible. It could be a band stepping back into the spotlight in blisteringfashion.

A venue which did a pretty fair job of muffling Kele’s vocals probably helped. It would really,given that a large proportion of the criticism levelled at Bloc Party has been at Okereke’soccasionally cringe worthy ability to turn a mouthful into a verse.

So a sound system which morphed Ares’ opening line into “War! War! War! War! I declare a thumb war!”or the plaintive cry of This Modern Love into “You told me you wanted to eat up my sandwich”, wasalmost certainly a good thing.

There was a swagger and an ease about this performance. Basically, they looked as if they wereenjoying it. Which isn’t always something you often get with Bloc Party.

The songs which work on Intimacy worked here, and, unsurprisingly, the ones which don’t, didn’t here either. That’s Signs and Halo in the former and Mercury and Ares in the later. It’seasy enoughto categorise why: the failures are when Bloc Party find themselves trying too hard to be someoneelse, when there’s a horribly forced sense of experimentalism.

It’s a sense which is then missing from the songs which do hit the mark. There you just get theexcitement of pushing yourself in all manner of directions and coming out the other side withsomething fantastic.

But besides fussing of the new material, the most surprising development was finding how good someof the tracks from A Weekend In The City sounded. Hunting For Witches was spectacularly aggressiveand ruckuscausing to a foundation disturbing extent. A Song For Clay no longer collapsed inwards under theweight of scenester solipsist pity and just displayed itself as a coruscating rock song.

Despite what Intimacy might indicate, this show was mostly about a band who seem to, finally, knowwhere they’re going. When during So Here We Are Kele exclaims “I figured it out!”, and the stage lights go on full beam, the euphoric epiphany of the moment is hard to miss.

Whether or not this steely-eyed purpose is going to be adhered to in the future is harder to say,but one thing is for definite: this certainly wasn’t a struggle.