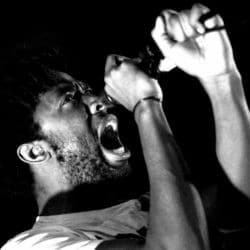 For any band, making your second record inevitably comes with some pressure.

When your debut is hailed as one of the finest records of that year, the pressure on the follow up could understandably cause problems.

For Bloc Party, on the evidence of tonight’s show, it’s difficult to tell if the songs showcased from A Weekend in the City have got the punch of the tracks that lifted them above the crowd of art school rockers.

And it’s not because the songs, or the performance aren’t up to the challenge. It’s largely due to the fact that the Octagon is one of the worst sounding venues in the country.

The room took the glass shattering, razor sharp riffs of Banquet and the ethereal poundings of The Prayer and covered them in bubble wrap. You’d think giving the venue a name to reflect its shape would indicate some consideration had gone into the ergonomics of the room. Well, you’d be wrong. The sound washed around like a damp towel limply lies in a pile on the floor. Little texture, weak and ultimately disappointing.

Marching on stage amid strobe lights and warp-esque electronic warblings and lunging headlong into opener Song for Clay the influence of Radiohead threatened to become the elephant in the room, particularly given guitarist Russell Lissack’s face-obscuring fringe and aggressive, angular style of playing resembles at times a tribute act to Jonny Greenwood.

However, Bloc Party could do much worse for role models as they find their way through the celebrity and critical acclaim heaped upon them. Kele Okereke’s shouts of “are you ready to rock!” come across awkwardly, particularly when greeted with the lacklustre response tonight’s crowd awarded to the enquiry.

Bringing tales of 21st Century London life to Sheffield on a drizzly February evening, the songs of A Weekend… have taken on directness where tracks like Helicopter or Like Eating Glass excelled in their vagueness. The morning after pleas of tonight’s encore opener Sunday or the cold reflections of I Still Remember are clear signs of the songwriting potential within the band, but moments like the “crosswords and Sudoku” reference within Waiting for the 7.18 do pose testing questions for the band.

Bigger, bolder and certainly a step forward, Bloc Party have clearly had mixed fortunes in dealing with their role within the bigger picture of British music. Whereas Radiohead were only hailed as the saviours of alternative music after they had made the record to save it, Bloc Party have seen heads turn their way expecting the next great alternative record. On tonight’s evidence, the songs they will need to make it aren’t a million miles away, but they’ve still some way to go.