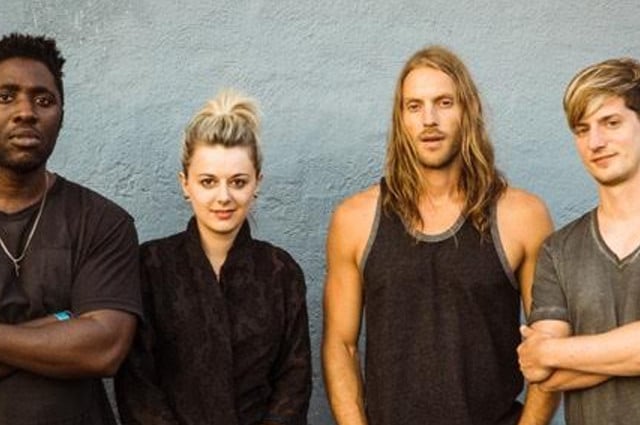 “Rock and roll has got so old, just give me neo-soul,” sings Kele Okereke on Into the Earth, one of several new songs Bloc Party play tonight. Could he be hinting at a new direction? They are, after all, only a few days away from releasing their fifth album, Hymns, and this gig is a chance to gauge the mood of the new record. Arguably the best band to come out of the mid-2000s indie revival, Bloc Party have often evolved their sound in big steps: their second album, A Weekend In The City, felt like a gradual progression from debut Silent Alarm, but Intimacy was a more of a step-change, bringing in electronic influences, and then with Four they took another left turn towards a heavier sound.

On the evidence of tonight, Hymns might be more of a corralling of the band’s ideas, an album in which they take stock of their not inconsiderable powers and consider how far they want to go with synth-pop, how far with forceful guitars, and how far with Okereke’s lyrical introspection. They have undergone a line-up change, with Menomena’s Justin Harris taking over from bassist Gordon Noakes and drummer Louise Bartle from Matt Tong, so perhaps the process of gelling as a group has taken precedence over sonic reinvention.

They open with new track The Good News, in which a chugging bassline and steady rhythm unroll into a chorus that’s dominated by Americana guitar tones. But this is a contrast to Different Drugs, which successfully takes a dubstep palette as the backdrop for the aforementioned neo-soul, resulting in a sound that recalls trip-hop. Virtue is perhaps the least ambitious of the Hymns tracks played tonight, rehashing synth-pop vibes that Bloc Party have deployed before, and then swerving into a coda that for some reason borrows its melody from the climax of The Killers’ Mr Brightside.

The new songs will of course take time to bed in – the crowd reserve most of their enthusiasm for older material – but for the most part Bloc Party hold the room with the Hymns material all four of them seem to be having fun. However, one can’t help but retain a nagging suspicion that the songcraft of the new tracks doesn’t quite hold up as well as it might. It’s difficult to identify anything from Hymns that might become a future Bloc Party classic.

But they are hardly short of classics from their earlier albums, and the strength of tonight’s setlist is its showcasing of their versatility. The anger and urban confusion of Song For Clay (Disappear Here) leads seamlessly into the sex and bravado of Banquet, which is in turn followed by the balaeric synths of One More Chance: a magnificent trio of songs quite different in their moods, but which work perfectly when played one after another. Elsewhere in the set Mercury is bolstered by some fine work on baritone sax by Harris, and She’s Hearing Voices and This Modern Love make for sterling encore material. It’s great to have Bloc Party back if only for this. Has rock and roll really gotten old?