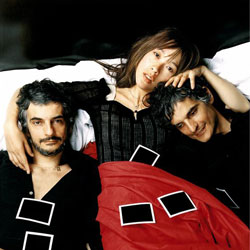 The amps are to 11 for the support act Devastations’ sombre, atmospheric tidal wave of sound.

But lyrics get in the way of the monumental earsplitting noise; and while their music is pitched somewhere between Massive Attack and Joy Division, the live set is not half as good as that could be, coming across more like Editors.

The highlight of the support set, perhaps for the wrong reasons, is when the lead singer, lost in his own creative swell, starts simulating grinding hips with his bass. Although politely received, it is clear no-one actually came to see them.

By contrast, Blonde Redhead are rapturously received before they have played a note. As the New York trio take to their stage, the heat of the packed Empire does nothing to dampen the devoted audience’s enthusiasm.

The opening track, Falling Man, is a pile-up of stuttering guitars and deep, penetrating, mournful bass line. Musically it is intricate, but Amadeo Pace’s reedy vocals are lost, and standing behind the microphone, he does little to engage the audience. It is Kazu Makino, jumping about the stage with the bass who grabs attention. Switching to guitar for Dr Strangeluv, Makino also takes to the microphone – her high pitched soaring vocals are full of theatrical wonder.

While Amadeo delivers the sinister and doubting lyrics of Spring and by Summer Fall, Makino stalks the stage, teasing fevered rhythms from her guitar. During a duet she coaxes Amadeo into joining her in a guitar duel, which is the only time of the night when he doesn’t look uncomfortable. Whether behind a keyboard, wielding a bass, on guitar duties, providing ethereal vocals, Makino is a spellbinding performer. Stalking around the stage, offering glass-shattering barks during Equus she is captivating – dressed in a smocked dress and moving jerkily as she does so she has an air of a glorious cross between Yoko Ono and Heidi.

But it is not a one woman show, Amadeo’s guitars are generous, intricate, and highly effective and brother Simone Pace’s drums pummel the audience, at times shaking drifts of dust from the cornicing of the Shepherd’s Bush Empire.

Perhaps too much of the set is reliant on the level of noise. The detail in the songs is occasionally lost. And the volume, especially for anyone who was there in time to see Devastations, is tiring. Perhaps a few more moments where the lyrics were allowed to be heard, and a couple of breaks from the never-ending onslaught of the wall of noise, could have held the interest of the non-devotees for a little longer. But most of the crowd seems to not care one bit, receiving each song with unbounded appreciation.