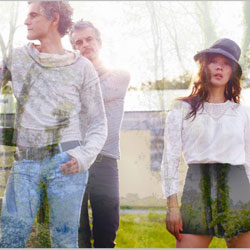 Blonde Redhead are one of indie rock’s best kept secrets. After 15 years, and three discs into an extremely fruitful relationship with 4AD (a label they were born to grace), the New York trio sparkle as much as ever as they take to the stage in a virtually sold-out Shepherd’s Bush Empire for a set comprised almost entirely of their last two albums: the recently released Penny Sparkle, and 2007’s 23.

Front-woman Kazu Makino and the Pace brothers, Simone and Amadeo, have been busy in the three years between their most recent studio album and its predecessor. While not exactly bursting through to the mainstream and taking the charts by storm, lending tracks such as 23 to the soundtracks of TV shows including Skins and Grey’s Anatomy, plus the odd car ad here and there, has put them closer to the radar of the discerning indie cognoscenti than they’ve ever been, if not quite enabling them to hit the mainstream.

It’s perhaps indie snobbism, then, that saves the biggest cheer of the evening for one of the oldest tracks they play tonight: Falling Man from 2004’s Misery Is A Butterfly. It’s predated only by 2000’s Melody of Certain Three, the only pre-4AD track on offer, which they save for the encore, and which receives an equally warm reception.

But mostly, they stick entirely to tracks from Penny Sparkle and 23, starting with Black Guitar and Here Sometimes, both from the new album, and ending their three-song encore on its title track. This is no bad thing: dressed in sequined skinny jeans, Makino emerges from a subtle cloud of dry ice smoke and dream pop drone, punctuated by blitz-style searchlights that shoot up towards the Empire’s ceiling and bone-shaking bass drums. Their sound falls somewhere between shoegaze and heavy rock, energetic and full of more life than most bands can lay claim to after a decade and a half. Can you imagine Oasis or even Blur daring to build a set around their output of the last five years only?

Blonde Redhead remain a rare treat of a band who have managed to survive for longer than most, never compromising, never changing their sound so much they lose their loyal base, and never quite managing to fit well enough into any one genre. As a result, they’re a little hard to place but equally hard not to like; they’re a grungey, shoegazey, art pop experience that rarely disappoints.