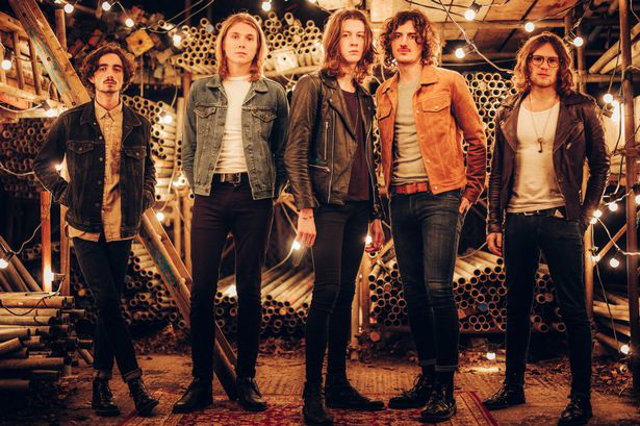 After enjoying a stellar 2016 – which included the release of their chart-topping debut album – Blossoms were a natural choice to headline this year’s NME Tour. And while the standing of the publication in the music industry is nowhere near what it once was, the tour has a long history of supporting bands who have gone on to achieve mainstream success, with Arctic Monkeys, The Killers and Royal Blood all featuring on previous bills.

Yet there is a different feel to this year’s tour. For one thing, NME didn’t actually organise the show – instead they sponsored a series of previously announced headline dates by Blossoms. As a result, it’s more a case of NME needing the Stockport five-piece than the other way round, which is quite a compliment to the pulling power of Blossoms, who were only playing small Bristol pub The Mother’s Ruin a little over two years ago.

Taking to the stage at the Academy following energetic sets from the hotly-tipped Rory Wynne and Cabbage, Blossoms quickly demonstrate exactly why their rise has been so rapid. At Most A Kiss gets the party started, with its chugging guitars and glossy ’80s-indebted synth melody instantly finding favour, before the band move almost effortlessly into the psychedelic Texia with its understated, but infectious, chorus.

From the off, it’s clear to see where the comparisons between Blossoms frontman Tom Ogden and Alex Turner arise. The former already appears completely at ease in the spotlight, exuding plenty of swagger and confidence as he leads the crowd through a chorus of Blow, while his vocal style is also not too dissimilar to Monkeys’ main man. One thing that does set the two apart, though, is the consistency of their back catalogues.

As Blossoms settle into their set, they are exposed as they begin to reel off so-so album tracks and instantly forgettable B-sides. Smashed Pianos was one of the weaker offerings from their self-titled debut and it sounds just as flat live, while there’s a reason why Smoke and Across The Moor only made the extended cut of the album. In contrast, Arctic Monkeys regularly produced B-sides that rivaled their singles.

The quirky Fourteen is another B-side to get an airing and although it’s a perfectly adequate synth-pop tune, it is rather shown up by being jammed in between the far more accomplished singles Honey Sweet and Blown Rose. The latter, in particular, sparks the audience back into life after a lull in proceedings, with its addictive chorus instantly sweeping everyone up and encouraging a mass sing-a-long.

This is only continued by fans’ favourite My Favourite Room, which is proceeded by the now traditional routine of Ogden picking out a lonely soul in the crowd to interact with during the song about lost love. It may be a bit of a gimmick, but it works, and Ogden ensures that the main set ends with a flourish by segueing from Babybird’s You’re Gorgeous into Oasis’ Half The World Away and, strangely, Last Christmas.

After a brief interlude – Blossoms are certainly not ones for dragging a gig out unnecessarily – the quintet return for a storming encore. Cut Me And I’ll Bleed delivers a sultry indie dancefloor anthem and Polka Dot Bones hints at a darker and edgier side to the band, one which they will hopefully explore further, while atmospheric album closer Deep Grass gives the crowd a chance for a breather before the final hurrah.

And what a last hurrah it is. Every band takes a different approach as to when to play their most popular track, yet it feels only right that Blossoms should save their best till last as cheers greet the recognisable opening synth groove of Charlemagne. Blossoms may have a long way to go before they reach the level of their like-minded predecessors, but their chest-pumping, foot-stomping closer shows the potential is there in spades.