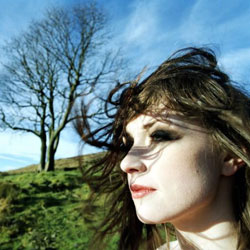 Three years ago Blue Roses, then known simply as Laura Groves, was bumped up the bill at the Enterprise in Chalk Farm after a pre-Chasing Pavements Adele dropped out due to illness.

At tonight’s gig, decked out with tables, chairs and candles, she looks different; a tiny, dark haired and sparkly frocked little thing, with a soft Yorkshire accent to match, instead of the plain, jeans and t-shirt girl who nervously took to the stage back then.

But the biggest change is her vocal. Back then she had an endearing, crystal clear folk voice. Today she’s developed the near-choral quality of Joanna Newsom, swooping effortlessly between moody whisperings and high-pitched pleas at the drop of a hat.

She follows Paul Thomas Saunders – an angsty, reflective young man, in the vein of Fleet Foxes. Startlingly immediate, his songs are beautifully arranged and paint scenic tales that have the room entranced. Waking And Evening Prayers For Rosemary-May and Starless State Of The Moonless Barrow sound like tracks that’ve been on rotate for years. It’s snug, comfortable stuff, and sets the mood perfectly.

Words like ‘dreamy’ and ‘ethereal’ may be horrendous cliches, but they’re apt descriptions of the music Ms Groves and her two bandmates make. The symbolism of the blue rose in David Lynch’s Twin Peaks – sadness, beauty, mystery – makes her moniker satisfyingly apt and, from the moment she steps on stage, we’re putty in her hands.

Most of her debut self titled album, released last April, gets an outing, and while it’s screaming for obvious singles, it’s hard to tire of the enchanting, wistful melancholy in her fairytales of love, loss and everything in between. Like a female Bon Iver, her fragile, delicate voice has an other-worldly quality that sends shivers down spines and silences the room.

With such a startling voice it’s easy to ignore the music, which is impeccably arranged, with layer upon layer of sounds and texture, helped by band mate Sadie who, at one point, manages to play keyboard, violin and glockenspiel all in one song. Highlights include I’m Leaving, a reflective track that Regina Spektor would kill for, I Wish I and the triumph of her album Doubtful Comforts.

As Groves flits between piano, keyboard, acoustic and electric guitar she looks painfully shy and nervous and she only seems to shake this off in time for her solo encore. “This is a new one,” she whispers, peeping from under her fringe.

At a time when female singer-songwriters are cluttering up the charts, Groves is playing the game well. She’s neither twee nor hip but is instead forging her own scene. She’s already achieved so much in three years, and it shouldn’t take much longer to nurture the confidence that’s the only thing missing from her live show.