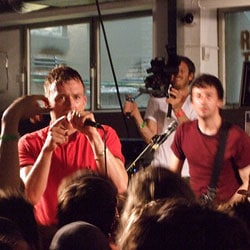 As the curtain dropped on a dramatic, inspiring and refreshing couple of weeks of sporting action, the eyes of the world were once again centred on the Capital for the closing ceremony of the Olympic Games. But for the 80,000 people crammed into Hyde Park, they were treated to an alternative final showdown at the BT London Live Closing Ceremony Concert with a premium line up consisting of Blur, The Specials, New Order and Bombay Bicycle Club. Apparently, The Spice Girls were also playing just down the road. Not that these people cared.

The packed park was reminiscent of life on the other side of the fences surrounding this famous field – with a chaotic, but vibrant and excitable atmosphere. Fans scrambled for overpriced beer before fighting into prime positions to witness what is reportedly the last ever Blur gig.

In between bands, giant screens beamed back the final action of the Olympics followed by the start of the closing ceremony, with replays of Mo Farah’s success the previous night receiving the same level of enthusiasm as if it were live. This energy set the tone for the entirety of Blur’s marathon set right from the off, as the band rolled straight into Girls And Boys swiftly followed by London Loves. “This is London Loves and we love London!” declared Damon Albarn sending the crowd into a patriotic and proud frenzy.

At one stage, Albarn was forced to halt proceedings with pleads for the crowd to look after each other as the fans hurled into overdrive. The high status of this gig did not, of course, faze the band one bit. In fact, they were thriving in the moment as though they were indeed doing this thing for one final time. Albarn in particular was on top form bounding around stage with a beaming smile. Meanwhile, James looked as cool as ever swaying with his bass with a cigarette in his mouth, Coxon, sporting his distinctive glasses, playing his guitar like no other can, all driven on by pilot and drummer Rowntree. These young men are in their 40’s. Apparently.

Classics such as Beetlebum, Coffee and TV and Country House were perfectly balanced with slower numbers such as Out of Time and loyal fan favourites such as Jubilee and Advert. Many of the songs were wonderfully enhanced by a full brass backing band, as the warm summer evening dropped dark. The colourful scene was set.

Damon Albarn paid tribute to the local “incredible” sporting heroes, prompting raucous chants of “Team GB!” across the park. Then, right at the peak of passion Albarn introduced Phil Daniels and Harry Enfield to the stage. Needless to say, Parklife proceeded with the singing of the crowd almost drowning out the cockney slur of Daniels. Song 2 was shot through for what felt quicker than Usain Bolt tearing through a 100 metre race, but then the tone was beautifully slowed down with Tender as the set came to a elegant close.

If rumours be believed then, the encore may well have contained the last live songs ever played out by Blur, signalling the end of their hugely successful 24-year existence. And what better way to do it at the close of an historical couple of weeks for the city of London, where the journey all began. End of Century, For Tomorrow and The Universal brought to end a magical golden evening. Never mind Ennis, Bolt, Farah and Daley, this was the Albarn, Coxon, James and Rowntree show.