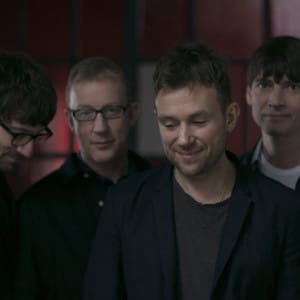 Blur‘s Hyde Park set is dressed in giant ice cream cones and a working ice cream van, from which Damon Albarn awkwardly dispenses Mr Whippys to the front row. After a Now That’s What I Call Ice Cream Van Jingles ouverture, the concert gets off to a thrilling start. The opener from their new album, Go Out, is the ideal bridge between old and new Blur and spoils the audience with a tour-de-force projection of neon-drenched pop culture that will not be matched for the rest of the concert.

Another Magic Whip single, Lonesome Street, works well enough, but has a little of the stale-milk smell of Blur-over-the-decades-by-numbers, suggesting a reluctance to push that album’s more adventurous material on a crowd that are mostly here for the nostalgia.

Performance-wise, there is little more room for the sexual ambiguity of the early Britpop years than there is for the subtlety of Blur’s more recent work. Albarn’s re-embracing of his role as front man, a laddish renaissance that begun with Blur’s last big reunion gig at Hyde Park and continued with Gorillaz’ Plastic Beach tour, is able to embrace little more than bullishness and a return to the ‘let’s ‘ave it’ lad culture that belies the subtleties of both his recent solo projects and Blur’s blossoming autumn years. Yes, it works, and both Albarn and the crowd seem delighted with the results. Yet, in the words of Out Of Time (unsurprisingly the only number played from 2003’s almost-Graham Coxon-free album Think Tank) “you’ve been so busy lately that you haven’t found the time, to watch the world spinning gently out of time”. There is a sense that if these large occasion concerts are all that Blur are going to find the time for these days, then Blur redux is all we’re likely to get.

So, perhaps predictably, the hits form the backbone of tonight’s set list, with almost a third of the numbers pulled from Parklife. Some of the more thrilling moments come from Blur’s darker, more dangerous numbers, like Trimm Trabb from 13. Then, Beetlebum, which, looking back is one of the most strikingly subversive Number 1 hits of the ’90s, is a very welcome staple of their greatest hits show, churning the audience into a frenzied dirge.

The more emotional moments of their hit-making career, like Tender and To The End, also galvanise the audience into a much-needed sensitivity. The Magic Whip is undeservingly underserved tonight, however, with just five of its songs debuting live here. Ong Ong slots neatly into the sing-along bonhomie, while one of the album’s weaker tracks I Broadcast finds its feet live, largely thanks to a multi-windowed projection that captures the hypermediacy of the YouTube generation. Coxon’s favourite from the new album, I Thought I Was A Spaceman, opens a cosmic window onto a more thoughtful, expansive Blur, but sadly fails to connect with the occasion.

Finishing with a majestic The Universal as the last rays of a welcome sunset infuse the park, another triumphant reunion comes to a close. Perhaps it is unfair to dismiss such triumph as now too easy for Blur to achieve, though nagging thoughts remain about what unlocked potential they have to deliver as a live band, given the confines of the live work that these days their schedules allow and the scale of concerts that inevitably follow.