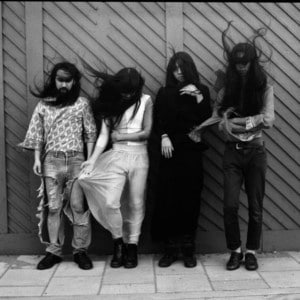 To those who don’t know, Bo Ningen are the sort of band you feel duty bound to explain in varying degrees of breathless hyperbole. “Well, there’s four of them and three of them have hair that makes Rapunzel’s tower seem pitifully inadequate, the drummer looks like he’s just been told the punchline to the best joke in the world and has absolutely no intention of passing it on to anyone and they make a noise which is like someone putting acid punk, doom metal, prog-rock in a blender and gaining true enlightenment after drinking the results.”

Given how busy it is in  tonight, at the first of two consecutive shows at the venue, it would seem the cult of Bo Ningen is growing. Something which is completely understandable. Over the last couple of years their reputation of being a live spectacle has grown to fairly mythical levels. Except, it’s all true.

From the moment that they stride on, they are a banging, flashing, blitzkrieg of an act. Slamming between time signatures, each of the two guitarists dropping lines which veer from delicately intricate to aggressively barbed and with a drummer (Monchan Monna) who pounds things forward with a heavyweight thrust.

DaDaDa is a yelping, pulsating explosion. Hekan’s chattering syllables and clanging guitars are ferocious, while Slider is freaky, in the best kaleidoscopic way possible. All the while the stage is a mass of hair and robes as singer and bassist Taigen Kawabe violently grasps at the air with a terrifyingly sure look on his face. As he’s the only one who can see these enormous things which are coming. To. Get. YOU.

It’s the first time they’ve played in London for a while and their return to these shores has also seen them start work on some new songs, two of which we get tonight. The first is relatively well-behaved. Sticking, mostly, to a single pace it builds on a simple, two-finger bassline to a naggingly insistent, and effective, conclusion. The other feels more traditionally Bo Ningen, in that it’s discordant, angular, barely constrained and bears the mark of four extremely talented musicians doing four entirely separate things, which then through some alchemy are brought together into a coherent, circle pit inducing whole.

Towards the end they have two left, they say. Two songs, run together with no visible join that build from resonating bass and guitars creaking with feedback into a swirling pit of noise, before accelerating into what could almost be a turbocharged version of Iron Man. On and on it goes, faster and faster it gets. There are what sounds like sirens and explosions, instruments are raised above heads and in Kawabe’s case, used to impale themselves. It is an end. It is a conclusion. It is the rapture. All hail our new(ish) psychedelic overlords.