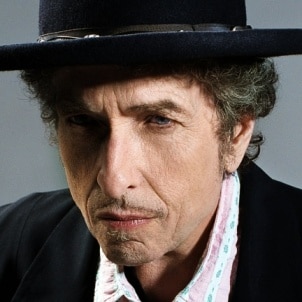 When you mention to someone that you’re going to a Bob Dylan gig you find yourself confronted with dire warnings – the sort of omens that in horror movies greet fresh-faced teens staying in isolated cabins in the woods. Regardless of whether these old wives’ tales of erratic performances are true or not, a Dylan gig is definitely one to add to your bucket list, and especially if it’s played to a modest sized crowd outside one of the most beautiful buildings in Europe.

Such an atmosphere went a long way to dispel any warnings of precocious sets (as far as any 71 year old can be called precocious), but there’s a ring of truth to general criticisms of his vocal performance; something which can sometimes veer between Vic Reeves‘ club singer or a bullfrog doing an impression of Tom Waits down a very deep well. Like the multiple number of actors playing him in the biopic I’m Not There, you never know which Bob you’re going to get from one scene to the next.

The set opened brilliantly with Blonde On Blonde’s Leopard Skin Pill Box Hat, a playful choice to kick things off and create a good atmosphere in the crowd. Regardless of the highs and lows of the performance everyone had a great time, not least of all one man in the middle of the crowd dancing non-stop like there was no tomorrow. During the set Dylan spent most of his time behind the keyboards dressed in a straw boater and resembling a travelling medicine man prescribing blues and boogie-woogie as a wonder elixir.

There’s never any doubt that he is a legend, and when he gets it right he gets it really right – Highway 61 Revisited was a brilliant highlight and the menacing vocal echo added to Ballad Of A Thin Man added a whole layer of creepiness to the classic track. However, Dylan is never one to dance to someone else’s tune – least of all his own, and while some embellishments to classic tracks added a new edge, there were also moments where some over-tinkering with the songs blatantly didn’t work. Such an example was A Hard Rain’s A Gonna Fall; a song that has a powerful rhythmic progression built into it ended up being hamstrung by Dylan’s frustrating ability to. Not be able to. Sing any more than. Four words or less. At any one time. Elsewhere, A Simple Twist Of Fate wasn’t entirely butchered but a steel bolt was shot through its skull as far as the dire rendition of the vocals went. Despite these frustrations, the music still sent shivers down the spine.

It’s difficult to tell if the problems with Dylan’s stage act are down to the ravages of time or his stubbornness in performing the songs as people remember. We all want the vocals of the ’60s and ’70s classic albums and in a sense we’ll always have them, but an interesting debate is to be had around who actually owns these songs now- do they belong to the fans or their creator? Or have the likes of Blowin’ In The Wind been so appropriated by pop culture that the answer is neither and maybe that’s why Dylan feels the need to render these unrecognisable from the originals? Is he defying people not to sing along? Or is he moving on and evolving in the same way as when he infamously went electric in the ’60s? Like a flashy movie, it’s easy to enjoy yourself at a Dylan concert, but as you head home and analyse the plot you find there’s more questions than answers.

One thing is for certain, whenever he grabbed a guitar or the harmonica a frisson of excitement rippled through the crowd. In that aspect Dylan’s voices remains undiminished and a great deal of pure joy was to be had from the likes of All Along The Watchtower and Like A Rolling Stone. Although there may have been a grain of truth in the warnings, it’s still worth seeing the master at work and even during the shakier moments you’re never less than aware that you’re being entertained by a truly enigmatic genius. While it might not have been the most perfect Dylan experience, it was certainly one to happily cross off the bucket list.