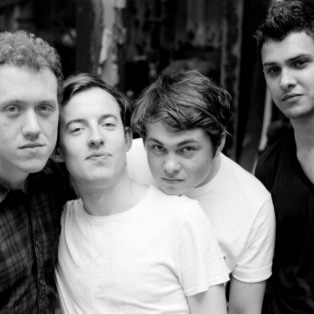 The rise of Bombay Bicycle Club since the release of their debut album I Had The Blues But I Shook Them Loose three years ago has been incredible. As guitarist Jamie MacColl reminds the audience at one point, it’s only a few years since the band used to meet at his house – from where they could see the magnificent Alexandra Palace – before going to watch gigs at the venue. Now the London four-piece are playing a sold-out headlining slot at the 10,000 capacity venue. And what a performance it was.

From the very moment they appeared on stage behind a dramatic translucent blue sheet to play a stunning version of How Can You Swallow So Much Sleep, there was a sense of destiny being fulfilled. Bombay Bicycle Club have worked damn hard to get to this point, releasing three albums in three years and touring on the back of all of them. Some bands do well to release one album in that time these days. The result of their endeavour is clear for all to see – you only had to look around the jam-packed Alexandra Palace to see thousands of dedicated fans singing along to every word.

There was a sense of celebration in the venue as the band launched into the effervescent duo of Your Eyes and Leave It from their third album, A Different Kind Of Fix, before a menacing rendition of Dust On The Ground from the band’s debut LP. Jack Steadman’s vocals sounded as unique and as compelling as ever, with the band throwing themselves straight into the intoxicating Bad Timing in what was an exhilarating opening.

Considering how the band have evolved over three albums, it was interesting to see just how they would integrate all the different elements – especially as their second album, Flaws, was entirely acoustic. Yet, the set found a place for a bit of everything, with the acoustic guitars brought out for heavier versions of two songs from Flaws – Rinse Me Down and Ivy & Gold – both of which sounded as bewitching as they did on the album.

However, it was the fan favourites from the band’s earlier material that were greeted with the biggest cheers. Most notably Cancel On Me and Open House – both from their debut EP, The Boy I Used To Be. The energy on stage was infectious as the band put every ounce of effort into their biggest headlining show to date, with the thunderous guitars of Evening/Morning leading to another wave of hysteria from the equally enthusiastic audience.

Steadman then introduced frequent Bombay Bicycle Club contributor, Lucy Rose, who provided her mesmerising backing vocals once more on tracks from the band’s most recent album. Lights Out, Words Gone sounded as wondrous and charming as it did on the record, before the beautiful Beggars echoed off the walls of the historic venue. The band then left just Steadman on stage at the piano to perform the closing track from A Different Kind Of Fix, the heartbreaking and sublime Still.

With the end nearing, the full quota of Bombay Bicycle Club was restored on the stage for a jazzed up version of the band’s signature single, Always Like This. The added saxophone provided extra joviality to proceedings before the four-piece made an ingenious transition between The Giantess and Emergency Contraception Blues to close the main set.

However, with the crowd not yet willing to venture out into the heavy rain and Bombay Bicycle Club wanting to soak up every moment of this special occasion, they returned to play an encore of Shuffle and the thrilling What If. As the band exited the stage for the final time, it was hard not to think that Bombay Bicycle Club should get used to nights like this. It was a phenomenal performance, from a special band.