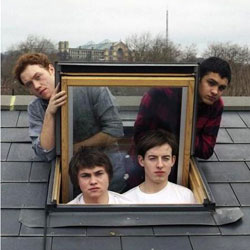 “It’s good to be back home,” Jack Steadman, the Bombay Bicycle Club frontman, announced with relief.

Ally Pally would be even closer than Heaven for the Crouch End boys but, on the last gig of their national tour, they celebrated in style with a relaxed performance in this intimate venue.

It’s been a big year for the Bombay Bicycle Club. After a couple of EPs and much media hype, their long-awaited debut album I Had The Blues But I Shook Them Loose received good reviews and respectable sales.

In their one-hour set, they played most of their repertoire to a partisan audience keen to get involved with hand-clapping and singing the choruses.

Highlights of the evening included an infectious account of the dreamily romantic Lamplight, the more urgent, hard-grooved Evening/Morning, the adolescent lovestruck Dust On The Ground, the jerkily rhythmic Always Like This, the bittersweet Cancel On Me and a stirring run-through of the relentlessly driving What If, which really got the crowd going. They also played a new song Ode To Lucy which went down well.

What was impressive about the gig was the maturity of the musicianship of a quartet still in their teens. The versions of the songs they played live were often subtly different from those recorded, and they are not afraid to slow or quieten the music down, reserving power for when they need it, so there is plenty of light and shade in their performance. They do not go in for any stage posturing but let the songs do the talking.

Bombay Bicycle Club are now a pretty tight outfit. Steadman’s quivering vocals – which admittedly are not to everyone’s taste – were put to good effect here, not dominating the music but merging with it melodically. Guitarist Jamie MacColl and bassist Ed Nash contribute equally (and even swap instruments on the penultimate song), while Suren de Saram keeps the beat crisply on drums and a session player on keyboards adds texture to about half the songs.

It will be interesting to see what direction Bombay Bicycle Club take next as they move off the road back into the studio to work on their difficult second album. But meanwhile they have certainly shown they can deliver the goods live.