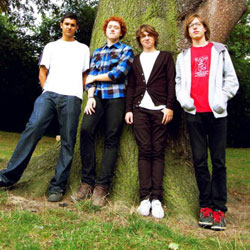 A gig listing where Stephen Fry precedes Bombay Bicycle Club warrants a few questions. What exactly is Stephen Fry going to do? Has he taken up tabla? Is he going to add to his list of talents and showcase his latest tonight?

Fry and this particular BBC are, if nothing else, an obscure combination. But when a rigger starts clambering up to the ceiling of the spectacular venue to release lines that could resemble some sort of trapeze contraption, eyebrows are raised further.

Fortunately he is only here to enrich us with his thoughts, anecdotes and wealth of facts and then to introduce the band. He refers to them as “newcomers” in a comparison to last year’s counterparts, Mumford And Sons. This is a little untrue, considering they have actually playing together for the past four years have just released their second album, Flaws.

Despite the venue’s size the gig feels very intimate, and the crowd are an eclectic mix. It is doubtful that the patches of silver heads sporadically littered in the crowd are here for Bombay Bicycle Club and it is proven as they clear off soon after Fry is done.

However, the majority are clearly die-hard fans of the band as the stage is surrounded and for the first time in the evening the crowd is silent, mesmerized by lead singer Jack Steadman’s haunting vocals. They power through a rich selection of songs from I Had The Blues And Shook Them Loose as well as their latest offering, in what is an extremely tight set.

There is no talking between songs and the only break comes from the swapping of strings which Jamie MacColl and Ed Nash seem to do after every song. Their concentration on providing a pure, no-frills performance, that focuses purely on their ability to play, leaves no need for anything else.

The spell is slightly broken when they burst into the charming Ivy And Gold, which stands out as being rather more upbeat than the majority of their repertoire. This is shortly followed by crowd favourite Always Like This, which provokes a rapturous applause.

They draw the set to a close with a crescendo of the powerful What If, which really leaves the crowd on a high. A perfect homecoming for the Crouch End boys, all in.