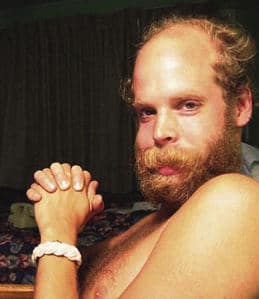 The mark of a great performer is not just being able to fill a four-tier venue, but to do so with songs culled from across a decade and a half of a stellar career. Will Oldham could have simply trawled new album Wolfroy Goes to Town in front of the huddled masses but instead he chooses to take its sparse, minimal style and show off his strengths by applying this not only to the new songs but also to those dating back to before the millennium. Perhaps it’s an attempt to counter the critics who have dared to accuse some of his recent work of ‘cheering up’: the arch alt.country miserabilist wants to prove he’s still got the darkest blues.

He performs tonight under the simple moniker Bonnie Prince Billy, though there seems little reason not to have added ‘- and The Cairo Gang’ to the bill, as his band contains regular collaborators Emmett Kelly and Angel Olsen. When both contributed much to Wolfroy it might seem a shame that tracks from it are so thin on the ground, but there is little to really complain about: they are spread out between long-established live favourite I See A Darkness – perhaps the closest thing Oldham has to a ‘greatest hit’ – and others including You Want That Picture, from 2008’s Lie Down in the Light, The Seedling, from 2006’s The Letting Go and Three Questions from 2003’s Master and Everyone.

Wolfroy Goes To Town’s bleak minimalism works surprisingly well in the opulent surroundings of Hackney Empire. Liberally sprinkled over the older songs, it reimagines them in its image. Nowhere is this more true than during the encore, where Oldham and the gang offer up The Merciless and Great, from 2010’s The Wonder Show of the World, and long-time live favourite Pack Up Your Sorrows, a song such veritable performers as Joan Baez and Johnny Cash have previously tried to make their own. Neither would have sounded out of place on his latest studio offering.

Oldham’s personal beauty, ironically, seems to move in inverse proportion to the beauty of his songs. Shaggy bearded, with what hair he has remaining allowed to roam free, he is the antithesis of the modern pop star, an old-fashioned troubadour with songs that sound homespun, but homespun from barbed wire. His between-song banter is equally soaked with black humour, from teasing the audience about the Mayan predication that everyone will be dead by the end of 2012, to suggesting that songs featuring the autoharp (rather than the grand piano) are the ones during which we’d be best advised to take a pee.

The result of all this is a rough and delicate beauty that brushes over the hushed auditorium in a way only Oldham and his trusted lieutenants can achieve, weaving tradition into songs and melodies sharpened with a modern edge. The newest songs, most notably Quail and Dumplings, slot so neatly into this mix it’s doubtful the uninitiated would notice the music performed here tonight is not taken from a single album. This is Oldham’s real skill – mixing time-honoured country traditions with knowing post-rock vulnerabilities, he has straddled the earliest days of alt.country, through Americana and Twisted Folk, to remain something unique and fresh. Inside, you know he’s smiling, even if only at himself.