by Ian Roullier
published: 29 May 2010 in Live Music Reviews
Tweet 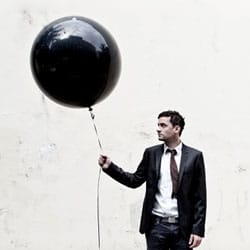 Ten years since his debut on a small independent label, Animal Magic, Simon Green’s career under the Bonobo banner has spiralled slowly upwards to land him tonight’s headline spot at a packed Roundhouse. Green has come a long way since his old cut-and-paste sample-based days.

Having successfully prised himself away from the bland, formulaic coffee table overtones that saw the whole chill out scene eventually congeal into a sickly sweet, beige goop in the early noughties, he has gradually moved towards creating his own music from scratch. With samples swapped for real instruments, vocalists and orchestral, jazzy arrangements, this led to the well-received Days To Come in 2006 and latest album Black Sands.

His move from sound selector to sound creator is in full evidence tonight with live strings, brass, drums and keys all combining for opener Kiara. Starting out contemplatively orchestral, it ends up being underpinned by a jacking hip-hop beat and deep bass and overlaid with retro videogame-style electronic bursts.

It’s easy to mistake the xylophone playing, maraca shaking, laptop fiddling, knob twiddling, king-of-all-he-surveys on the raised platform as the man pulling the creative strings. However, when Green finally speaks after a few well-received tracks from the new album, he reveals himself stage right as the bass and keyboard player. This may be his music but the way he merges into the band it’s clear there’s no ego involved.

Andreya Triani then comes to the stage to command the limelight. Her vocals, which pepper the album liberally, are strong, soulful and smooth and form the ideal complement to the music. The overall sound is big, perhaps too big at times as various layers merge and the details, and vocals, get a bit lost in a sea of bass. This is more likely down to the set up of the sound system though and, rather than ruining the performance, merely takes the edge off of it.

Green manages to retain a relaxed air to proceedings overall. There are a couple of moments where squealing self-indulgent solos take over but these are thankfully kept to a minimum and melody and harmony form the overall focus.

Triani ends her performance of Eyesdown by cleverly sampling and layering her own vocals several times to harmonise with herself. The rousing strum of Recurring is then followed by the reggae-style intro of new album standout We Could Forever.

As the crowd scream hungrily for more, Green and co. return to perform the enchanting, gypsy-like Black Sands which breaks down into a full on sax and drum duel midway through before rebuilding back into the main track. Triani then leads the flute-hooked Kong and Bonobo’s largest gig to date is over.

Fantastic musicianship, a wealth of talent on stage and a performance honed to perfection, the only chink in the armour could be that this kind of music may be better suited to wafting across a sun-drenched festival field than in the dark big top that is the Roundhouse. Not that the passionately vocal crowd seemed to care about that of course.

Bonobo’s following may have swelled slowly and organically but with tonight’s performance proving to be a qualified success and Green’s music increasing in confidence and depth with each album, that following can only be set to grow further.