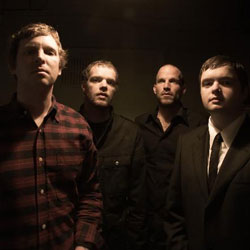 Brakes have managed to get here tonight through the snow from a gig in Manchester, singer Eamon Hamilton wearing a one-piece silver suit from a new line of vintage winter space clobber that he ripped off a downtrodden alien on the way.

They mess about a bit, and Hamilton does his best to keep up with guitarist Tom White in the laddish banter stakes, but when the songs start he finds his home between their feisty hooks.

The Brighton band have this wonderful lyrical fascination, an uplifting soul that takes one in beyond their frenzied performance. When Hamilton sings in his impish-poet manner between the star-bothering guitars he creates a winning kind of intricacy.

He’s a unique front man driving his merry men beyond conventional lands. Spring Chicken is like an inspired tramp pick-pocketing a city fashionista, Beatific Visions a note in poetry he puts in his girlfriend’s pocket before slinking off into the night.

Songs from the new album pass by with the same Brakes combination of madness and starry-eyed soul, a soul that comes through in a broader fashion when things take a country leaning, and Brakes’ trademark live version of Johnny and June Carter Cash‘s Jackson is as always earnest and brilliant.

They leave us with one of their short bursts of literate death metal, Comma, Comma, Full-Stop, playing it twice to accentuate its grammatical importance, and it’s a fittingly educational way to cap an edifying night.