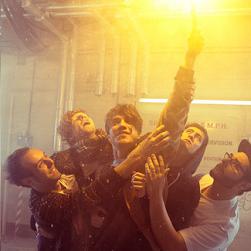 It’s all good in the hood, so the phrase goes – and three of the five members of London inner city group Breton should know, having arrived on stage at the Scala wearing theirs. Weather protection was not the name of the game, of course – but what could have looked like a contrived statement was made to fit in perfectly with the band’s image and music.

The quintet currently live in Kennington, but as their front man Roman Rappak informed us, the building that they share with a number of artists is about to be knocked down. While that elicited sympathy from the capacity crowd Breton seem to view this as a platform for something new, and the gig had a feeling of being the last opportunity to digest their first – and very fine – debut album Other People’s Problems.

Breton’s music bristles with attitude, and was delivered with the odd surly look to go with its pulse-enhancing energy. This tension runs right at the heart of the band’s work, whether it be in Rappak’s carefully thought out lyrics, Adam Ainger’s wide range of rhythms, taking on influences from Afro Caribbean to grime, or the images of urban life taking place on the constantly flickering screen at the back of the stage. There will surely be a film in this band’s canon soon.

The three elements often combined imaginatively, so we were presented with a floor shaking bass with the potential to reach the Piccadilly Line below, vocals that occasionally soared towards the reach of the Scala gallery, and energy aplenty in the crisp beats for those who had brought their dancing shoes. Dimly lit, the band only threatened to go off course when the spectre of indie dance reared its ragged head, but that was seldom, for in Edward The Confessor, Electrician, Interference and new single Population Density there was plenty from which to take inspiration.

In fact the chief criticism of Breton would be that their songs were over too quickly, despatched by Rappak with the minimum of fuss. Many were brooding mini-epics in minor keys, finished either with a percussive flourish from Ainger or a burst of biting synthesizer bass, but plenty of room was left for unpredictability. This sense of spontaneity serves Breton well when live, and it helped on this occasion that they played their music with real meaning and conviction, like their lives depended on it – which, to a large extent, they do. Keep an eye on these guys and where they move next, both geographically and musically.