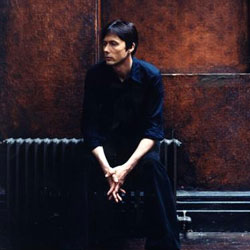 To review Brett Anderson at the Mermaid Theatre as a concert would, in some ways, do it a dis-service.

It was less a concert in the traditional sense than a flight of sycophancy, the Brett Anderson equivalent of a Star Trek convention as he hawked his latest wares to an adoring audience of die-hard fans who, quite frankly, would have given him a standing ovation for coming out and farting.

On the plus side, it is easy to chart this as the next step in his evolution as a mature, elder statesman of Britpop, mixing the wry lyrics of very English observations (planting rosemary mostly, these days, it seems) with the pomp and circumstance of piano and strings he first explored as far back as Dog Man Star.

In fact, it is the songs from that second Suede album – Still Life, The Power, The 2 Of Us, The Asphalt World and The Wild Ones – that suit tonight’s treatment best. Stripped of the overblown pretensions of a full orchestra in favour of Anderson’s piano accompanied by a lone cellist, they sound fragile and full of emotion, songs that were always striving to be something better than they ought to be but, as the nouveau riche so often do, at first going much too far.

But this evening is not meant to be about the old songs. It is intended to showcase his new, second solo album Wilderness, due out on general release later in the year. The punters who have coughed up 30 a ticket tonight bought a package that included a USB stick containing the songs from that album, ensuring that with or without internet leaks, they will be familiar with the music on arrival.

In various eras and sizes of Suede/Tears/Brett t-shirts, the audience look like the kind of people who will be more than happy to buy the album in all the myriad formats in which it sees the light of day, so the USB is both a nice touch and no risk to the sales of the ‘real’ thing when it arrives. Say what you like about Anderson, from the earliest days of Suede fan club-only Christmas releases and secret/free gigs, he has always known how to keep his audience sweet and how to make them feel special.

The auditorium is filled with the same crowd that will have seen his acoustic evenings of last autumn at London’s more prestigious concert venues, and it is these evenings that tonight’s style most resembles. Britpop as chamber music, by a man who is doing his best to grow old gracefully.

I try to suppress the urge to sneer at the overly-adoring fans and their standing ovations that aren’t really deserved. I freely admit that I am drawing comparisons of tonight’s show with an album limited to 1,500 copies. I immediately recognise the third song of the evening, Clowns, as an obscure b-side (although it’s on the new album as well, as it happens) and, of course, there is the fact that I am here at all. Stones and glass houses spring to mind although with Suede it was always more stones and concrete jungles, The Asda Towns and Asphalt World of dream-destroying satellite estates. Brett lives somewhere else now, and I wonder if the music still speaks to us in the same way.

The new songs – A Different Place, The Empress, Chinese Whispers, Blessed, Funeral Mantra, Back to You, Knife Edge and P Marius – sound comfortable, content, a bit too cosy for the Brett we knew. There is little anger or bitterness in their harmonies or lyrics. There is none of the pain of his father’s recent death that suffused his first solo attempt, nor the edginess of The Tears, a remarriage that always seemed to be walking on egg shells. Pleasant piano ballads, with little variation, the new material falls a little flat, and not only because when Emmanuelle Seigner duets on Back to You, her voice isn’t as strong as his.

So we sit through the new album track-for-track before the interval, tail-ended with a standing ovation that is based more on love than merit, and come back after the break for a more varied set that spans his entire career, from Pantomime Horse through transitional b-sides The Living Dead and My Dark Star – the foundations on which tonight were surely laid, whether he knew it at the time or not – later live survivor By The Sea and just one song, To The Winter, from his previous solo effort. And those pared down, unpretentious offerings from Dog Man Star. This, far more than the first half, was worth coming for.

For the encore, he takes requests from the audience. The deeply ironic – as he admits himself – So Young, Ebony and Everything Will Flow. Out comes Seigner for an English-language version of her song ‘Les Mots Simples’ (The Simple Words), before the traditional closer Trash leaves the audience happy, contented and no doubt convinced they have had their money’s worth.

And they have, when all is said and done. It wasn’t a spectacular show, but it was intimate, and for the fans. If the only criticism is that this was more a present and a thank you from Brett to his most obsessive followers than it was an objective evening of musical development, is that really a valid dig? He has worked hard for this level of success, and for this level of devotion. Let him bask in it for as long as he wants.