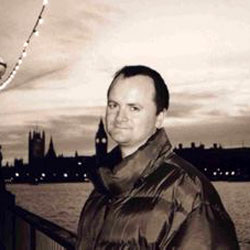 Brian. Well, why not? As bands’ names go, there’s been a James. Maybe there’ll be a Dave or a Trevor. This band’s name, as was undoubtedly intended, tells much about front man Ken Sweeney’s approach to life, the universe and the music industry, and he’s by no means too shy to talk about it.

This I discover while talking to some fans who’ve flown in specially from Dublin to see him as up he saunters, pulls up a stool and introduces himself as Ken. This is not the act of an egoist. Taken aback by his willingness to chat with me, I decide to play ball and before long we’re discussing his band Brian.

Why, ask I, was there a seven year gap between Brian’s first release and the current offering Bring Trouble? “I didn’t feel like anything was worth putting out,” says Brian’s front man matter-of-factly.

For this gig, in what was a very different place when called the Blue Note, Ken is backed by The Divine Comedy folk Bryan Mills on bass and Ivor Talbot on guitar. Without percussion, strings and keyboards the songs take on a starkness not felt on the album; the venue makes tracks like We Close 1-2, and This Kitchen 5am all the more intimite.

Now and then Brian conjure up The Lightning Seeds – On A Roll, This Kitchen 5am, Right Through Tuesday – particularly Sweeney’s vocals, while the acoustic guitar in places reminds of R.E.M. in their Out of Time phase. There are tracks here other bands would kill to release as singles – notably the terrifyingly catchy We Close 1-2 and Right Through Tuesday.

Yet this is not a band easily pigeonholed either with The Lightning Seeds’ commercial football-pop or with Setanta stablemates The Divine Comedy, a band often (wrongly) accused of bourgeois pretentions. Lyrics like “Go to work for someone else/Wishing I was someplace else” and “Lost in a crowd/trying to get home” would sound strange in a Divine Comedy song and are too honest to be from the pen of Ian Broudie; in Ken Sweeney’s songs they are spot-on.

Ken is no stranger to fame, albeit in small ways, appearing as he has in Father Ted. That show’s scriptwriter, Graham Lineham, paid for Sweeney’s demo tapes, as the album unashamedly declares. Dredging the depths of my brain for another example of a band thanking someone for their demo tapes, I quickly give up. The resulting album is utterly unpretentious, a quiet LP of beautiful lyrics and an almost serene atmosphere, uncomplicated and down-to-earth. If you are in a reflective mood, you could do worse than listen to ‘Bring Trouble’. If not, listen to it anyway; it will ensure a change of mood.