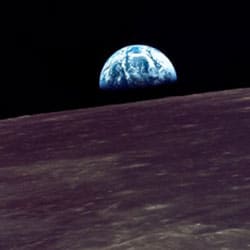 Brian Eno‘s 1983 album Apollo: Atmospheres And Soundtracks further defined the composer’s groundbreaking concept of ambient music. His previous experiments in creating music designed to complement and enhance the listener’s surroundings rather than impose itself on top of them led the listener to create their own mental imagery. Apollo was different in that it was written as a soundtrack to accompany Al Reinert‘s Oscar-nominated film For All Mankind, which set the music to edited footage of the Apollo lunar missions that took place between 1968 and 1972.

Icebreaker fill the stage first of all to play through David Lang‘s Cheating Lying Stealing, however, where a simple hookline is joined by brass, piano, panpipes, drums and the sound of steel wheel drums from cars being hit with hammers. It collapses into a more idiosyncratic and haphazard wall of noise then returns full circle to the original hook line. Next up is a performance of Michael Gordon‘s Trance, which is similarly challenging at times. Whether it’s art of merely a cacophonous racket is a matter of opinion.

This prelude creates the fear that Eno’s seemingly untouchable album may be reinterpreted beyond all recognition. But as the band return to the stage post-interlude, the screen is revealed and the music begins, these concerns are completely washed away and the second part of the show is a much more harmonious affair.

Reinert’s film is played in its entirety as is the gentle ebb and flow of Eno’s seminal album and every moment, while it may have been subtly reinterpreted, is completely respected by the band. At times it seems bleak as earth is left far behind and the fears that must have been going through the astronauts minds become all too apparent. At other moments it’s heartwarming and inspiring as the first moon landing is made, then humourous as various astronauts are shown bouncing around and falling over on the lunar surface.

The gentle warmth, icy eeriness, melodic calm and mood-setting ambience of Eno’s work is perfectly matched to the imagery and Icebreaker stay faithful to his original work. This includes An Ending (Ascent) which forms the high point of both the album and tonight’s performance. Two-thirds of the way through, BJ Cole joins in on the steel pedal guitar, providing even more warmth to the overall sound, the almost tropical feel of the music contrasting with the stark, empty expanse of the moon. The combination of the music and visuals is mesmerising, relaxing, absorbing and beguiling and while this is all there is and there is no narration, no more is needed.

Overall it is a fantastic rendition of a beautiful album to soundtrack one of mankind’s greatest achievements, and Icebreaker and Cole are more than deserving of the extended ovation they receive. Catch the upcoming UK tour if you can.