by Jenni Cole
published: 14 May 2010 in Live Music Reviews
Tweet 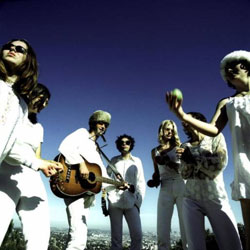 The usually chaotic (in a gloriously endearing way) Brian Jonestown Massacre did something rather unexpected on their most recent album, Who Killed Sgt Pepper? They achieved the musical equivalent of scrubbing up quite well. Their dreamy surf-pop influenced psychedelic stoner rock came out polished and slick, sounding hazy and warm but also unexpectedly professional. Can they possibly recreate this on stage?

Remarkably, yes. At Shepherd’s Bush Empire, Anton Newcombe looks mature and well, a grown-up rock star who has already lasted longer than his self-destructive past should have allowed. Surrounded by an eight-strong band, who at one point sport six guitars between them, tonight’s show creates luscious waves of sound that wash over an audience hungry to lap up everything they offer. Sharing vocal duties and crowd interaction with his colleagues, including maracas/tambourine man Joe Gion, works well, letting the crowd know that BJM is not just Newcombe’s one-man show.

Not everyone gets BJM but the audience tonight – four floors’ worth of them in total, as the venue is filled to the rafters – is made up of the faithful, ready to sing along and cheer the first bars of each and every number. One of them even gets on stage for a few seconds, though the bouncers soon send him back from whence he came. Newcombe makes everyone feel they’re welcome at the party, joking with the crowd, sharing anecdotes about the celebs he’s met while in London, and encouraging everyone to chill out.

In return, the audience proves to be the friendliest we’ve encountered this month as well as the most enthusiastic. By the end of the gig we have two new best friends who are enjoying themselves so much their enthusiasm really does deserve a mention. BJM are “no Oasis“, one of them offers, telling us “you can use that”. He’s not wrong. They are, in fact, the antithesis of Oasis – The Beach Boys to the Gallaghers’ Beatles – which is a stupid simile in a way, considering that BJM don’t exactly try to hide which ’60s band they’re really channeling. They’ve long surpassed any influences though; just as they’ve surpassed the image of being just the mad mates of The Dandy Warhols.

They play a mixed set, taken from across their prolific career. With so much to choose from, it’s not always easy to name the gems that rise out of the shoegazey harmonies but we think we hear Anemone, Jennifer, Free And Easy and, of course, the unmistakable tones of Not If You Were The Last Dandy On Earth. Their multi-layered, multi-harmonied sound isn’t easy to recreate live, so full marks to them for doing so.

If the last six months are anything to go by, Brian Jonestown Massacre have cleaned up their act on record and on the live stage, pushing their sound a bit more into the mainstream as they do. If they can drag their back catalogue along with them – and tonight’s performance seems to indicate they can – who knows what the future might hold?