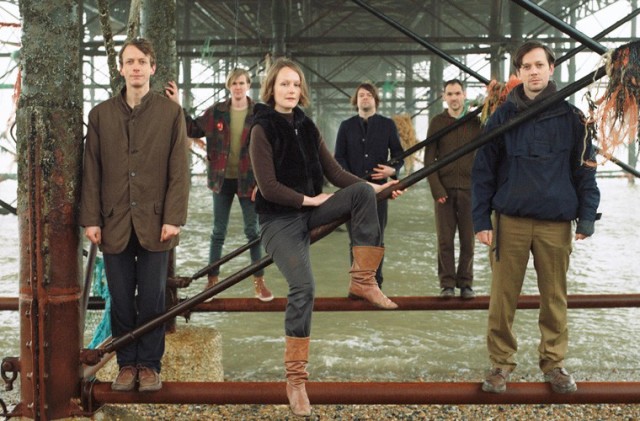 As mid-December becomes, with crushing inevitability, late December, and the festive season hoves undeniably into view, a brass band play God Rest Ye Merry Gentlemen as we enter The Haunt, stopping only for a welcoming sherry and mince pie at the door.

Inside, this converted cinema is bedecked for the occasion with even more foliage than the British Sea Power norm, festooned with fairy lights. Throw in model herons, mugs and fudge on the merchandise table, and the real and present danger of a mauling from a man in a ten-foot bear costume and it’s beginning to feel a lot like Christmas at the Krankenhaus.

After a tour afloat on the Sea Of Brass, accompanied by a 28-strong ensemble that at times threatened to swallow the idiosyncratic sextet’s magnificent bluster, the band played a series of gigs earlier this year celebrating the release of their 2003 début, The Decline Of British Sea Power. If those were the large, commemorative full-album shows, then tonight’s return to their semi-regular ‘Krankenhaus’ club night is the bonus disc, taking in the b-sides and non-album singles, along with selected offerings from Decline.

Always ambitious, with releases including two film soundtracks and a live EP recorded at the Czech embassy, British Sea Power’s recorded output has occasionally tended sonically towards the polite. But live, as here, they can be devastating: strip away the historical trappings, the flora and fauna and there’s a potent blend of the epic, the elegiac and extremes of volume. Childhood Memories’ arpeggios chime atop fizz and crackle (“But a little electricity won’t hurt…”), while a declaratory Remember Me is melody wrought from maelstrom, gathering itself together “increment by increment” amid controlled feedback squalls from guitarist Martin Noble’s too-loud semi-hollow.

Vocalists Yan and Neil trade places between Fear of Drowning and A Lovely Day Tomorrow, the half-whispered “Little England” lament of the first contrasting with the other’s bilious optimism (“while we kept on dancing, in our contaminated paradise”). It’s damaged but melodic, like a homesick Monkey Gone To Heaven. There are Pixies nods elsewhere, too – The Scottish Wildlife Experience marries the surf twang of Cecilia Ann to the fevered howl of Rock Music, with Abi Fry’s electric viola ramping up the urgency – but their sound is so unmistakably their own that a pair of covers – of East Coast dream-poppers Galaxie 500‘s Strange and Tugboat – could pass as originals.

The pace is quickened by the Eastern Bloc stomp of Fakir and, after the calmer interlude of A Wooden Horse, the floor shakes under the crowd’s bouncing soles during an outing for obvious favourite The Spirit Of St. Louis. Carrion follows, perhaps still defining this singular act, with its talk of “the salt, the spray and the gorgeous undertow” (who but a band called British Sea Power could sing “from Scapa Flow to Rotherhithe, I felt the lapping of an ebbing tide” with the necessary gravitas?).

After a stately, elongated take on Lately, with multi-instrumentalist Phil Sumner’s plaintive cornet intertwining with feedback, a cover of Julian Cope’s Out Of My Mind On Dope And Speed ends the set. Between Sumner’s pounding of a single chord on his keyboard and the steady pulse of Matthew Wood’s drums, it’s got the churning motorik thrum of Stereolab or Hawkwind, the nodding groove stretched out, then gradually falling apart as first that bear and then Noble – helmeted and held aloft – plunge through the crowd: a special brand of chaos to end a typically atypical show. Merry Christmas, British Sea Power.