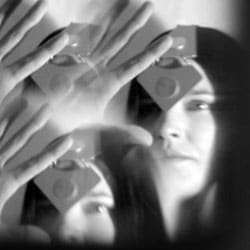 It’s fitting in a way that something so abstract as a billowing wall of volcanic ash somewhere in Iceland has unsettled the equally abstract Ether Festival in London. Micachu (and her Shapes) are stuck somewhere abroad and won’t be performing, so it’s left to Broadcast to satisfy a two-thirds full Queen Elizabeth Hall.

‘Satisfy’ is perhaps not the best word to use, given the fact that much of what unfurls over an hour is akin to sitting in on a lecture by two boffins in some kind of Soviet music lab. Facing each other and stood behind tables bowing under the weight of multiple keyboards and unidentified effects pedals, James Cargill and Trish Keenan begin the opening section (entitled ‘Audio Visual’) by teasing out improvised, intricate noises and weirdly chopped vocals. Snatches of songs from their recently released collaboration with The Focus Group emerge from the fog and then retreat. Any notion of separate songs, with room between for applause, are quickly dispelled.

This performance that relies on visuals as well as audio, with the pair stood either side of a giant screen showing grainy images of trees or swirling black and white pixels that feel almost trance-inducing when coupled with the music.

Things become more immediate in the second section (‘Song form and Story’). During Black Cat and its apt proclamation that things are getting “curiouser and curiouser”, it feels like we’re finally getting to grips with an entire song. When Cargill straps on a guitar, things start to resemble a ‘normal’ gig.

Thankfully, that doesn’t last long. During a brand new track, In Here The World Begins, Keenan emerges from behind her table and stands at the front of the stage as the myriad shapes and colours flit and dance on her plain white dress. It’s a stunning moment and one of many that manages to marry visual and audio in perfect harmony.

The third section, ‘Dream Visual’, continues the more formless and improvised elements of the opening, with Keenan’s flat, oddly ethereal vocals continuing to captivate. The atmosphere they create is so all encompassing that when the final note is played and the house lights come up it’s like snapping back into reality with a bang. For an hour we were part of Broadcast’s world, and though suggesting it was a pleasure might be pushing it, it was certainly an experience.